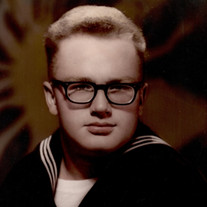 Eric Manning Shute, 78, 0f Wellington, Colorado passed November 26, 2021, of complications from his battle with COVID. Eric was born in Danville, Illinois on April 27, 1943, to Elias and Esther (Nearpass) Shute. Ric grew up in Powell, Wyoming and Laramie, Wyoming, graduating from Laramie High School in 1961. After high school, Ric joined the U.S. Navy becoming a radioman. He served on many ships including the USS Coconino County and saw duty in Vietnam. Ric served 28 years in the U.S. Navy and Naval Reserve attaining the rank of Senior Chief Petty Officer. When his active duty with the Navy ended, Ric moved to Cheyenne, Wyoming to work for Mountain Bell, which later became US West. Over the course of his 30-year career, he worked his way up from lineman to communication engineer. His job took him from Cheyenne to Littleton, Colorado in 1982. He moved to Wellington, Colorado after his retirement in 2015. Ric enjoyed officiating high school football and basketball. He was an avid golfer. In his retirement, Ric enjoyed travelling, spending time with his grandchildren, and keeping up on veteran issues. Ric is survived by his wife of 56 years, Sharyn, his sons Christian and Jason, and his daughter Erica Urban and her husband Cory. Also survived by his grandchildren Sophie, Clara, and Kellen Urban, Emilee and Ryanne Shute, Ashley Tormoehlen, and great-grandson Logan. He is also survived by his younger sister, Kimberly Boranda. He has many loved nieces and nephews. Ric was preceded in death by his younger brother, Dennis Shute. He was also preceded by many, many dogs, most of which he did not want, but loved with all his heart. A memorial service will be held 10 am, Friday, December 10, 2021 at Bohlender Funeral Chapel. Ric will be interred in the Cheyenne National Cemetery in Cheyenne, Wyoming with full military honors. In lieu of flowers, please make a donation to any reputable veteran non -profit.

The family of Eric Manning Shute created this Life Tributes page to make it easy to share your memories.

Send flowers to the Shute family.