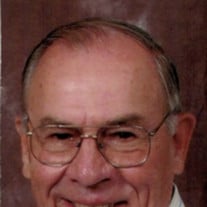 Our beloved father, Dale Solomon passed away peacefully on August 26, 2019 surrounded by his family. Dale was born on June 27, 1929 to Carl E. and Minnie M. Solomon in Windsor, Colorado. He graduated from Timnath, Colorado High School and attended CSU. After, Dale lived in between Windsor and Timnath, and also in Evans. He also lived in Seattle, Washington, working for Boeing Airplane. He then returned to Fort Collins, Colorado where he worked for Forney Arc Welders and then worked for Woodward Governor for 18 years. He then pursued him dream and bought a ranch north of Rawlins, Wyoming. He went on to work for Amoco Oil Company in Bairoil, Wyoming, then later transferred to Evanston, Wyoming where he retired. Dale married Alberta R. Hartung on August 17, 1952 in Fort Collins, Colorado and they were blessed with three children, Rodney, Dean, and Caroline. They had many wonderful years together and great memories. They later divorced, he then remarried Christene L. Fearnot on September 2, 1983. They lived in Evanston, Wyoming and had many great winters in Beaver Dam, Arizona to get out of the cold Wyoming ones. Dale loved rodeos, the ranching and farming life, was a great mechanic, and really loved to fish, hunt, and camp. Dale is preceded in death by his parents, Christene, brothers Bob and Bing. Survivors include sister, Elsie Fisher, Timnath, Co brother Bill Solomon Carr, Co, sons Rodney and Dean Solomon, daughter Caroline(Scott) Bury, grandchildren Robert Russell, Savannah Solomon(Ian), Maria (Jake) Lariviere, Christina and Lilly Solomon. Also stepdaughters Kathy and Bill Umbaugh and Connie and Bill Larsen and their families. A visitation will be held 5 - 7 p.m. Wednesday, September 4, 2019 at Bohlender Funeral Chapel. The funeral service will be held 10 a.m., Thursday, September 5, 2019 at Bohlender Funeral Chapel. Interment will follow at Loveland Burial Park, where Dale will be laid to rest.

Our beloved father, Dale Solomon passed away peacefully on August 26, 2019 surrounded by his family. Dale was born on June 27, 1929 to Carl E. and Minnie M. Solomon in Windsor, Colorado. He graduated from Timnath, Colorado High School and... View Obituary & Service Information

The family of Elmer Dale Solomon created this Life Tributes page to make it easy to share your memories.

Our beloved father, Dale Solomon passed away peacefully on August...

Send flowers to the Solomon family.