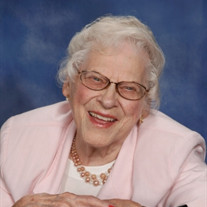 Elizabeth Marie Beilstein of Fort Collins was born in St. Joseph, MO to Otto Hansen and Dorah (Muelheisen) Hansen on September 7, 1917. She left to be with her beloved Lord and her beloved husband on November 5, 2019. She was a loved and loving mother, grandmother, great grandmother, sister, aunt, and friend. She was the youngest of seven siblings. She grew up during the Great Depression and told many stories of how she and her family survived those hard times. During World War II “Betty” met Walter Beilstein, Jr. at a USO sponsored dance for soldiers who were stationed at Fort Leavenworth, KS. They fell very much in love and were married (in 1944). Betty gave birth to Susan Christine and Walter James. Betty worked for many years as a comptometer operator at Armour Meat Packing Co. in St. Joseph. Walter passed away in 1982 and Betty moved, a year later, to Fort Collins to be close to Susan. Betty joined the congregation at Shepherd of the Hills Lutheran Church and volunteered in the Church Office for many years. She also volunteered at Poudre Valley Hospital for 25 years. Betty was a golfer, an accomplished bridge player, loved to swim and participate in all forms of dance and was an avid sports fan. Betty is survived by her daughter, Susan (John) Miller of Fort Collins; her son, the Reverend Walter James (Mary) Beilstein of Gardnerville, NV; her grandchildren, Christopher (Stacey) Miller of Concord, CA; Elizabeth (Kirt) Cothran of Lompoc, CA; Charla Joseph of Gardnerville, CA; and Joshua (Emilie) Beilstein of Lubbock, TX; and seven great grandchildren, Spencer Cothran; Aidan Cothran; Tayana Miller; Alex Miller; Sara Miller; Lily Joseph; and Brighton Joseph. All of her family and her many friends will miss her deeply. She was “Nanny” to her grandchildren and great grandchildren. A Memorial Service for Betty will be held at Shepherd of the Hills Lutheran Church on Saturday, November 16th at 10:00 A.M. In Lieu of flowers, suggested donations to Shepherd of the Hills Lutheran Church in care of Bohlender funeral Chapel, 121 W. Olive, For Collins, CO 80524.

Elizabeth Marie Beilstein of Fort Collins was born in St. Joseph, MO to Otto Hansen and Dorah (Muelheisen) Hansen on September 7, 1917. She left to be with her beloved Lord and her beloved husband on November 5, 2019. She was a loved and loving... View Obituary & Service Information

The family of Elizabeth M Beilstein created this Life Tributes page to make it easy to share your memories.

Send flowers to the Beilstein family.