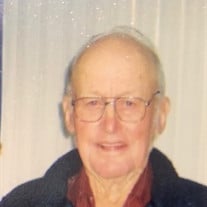 Edgar B. Seaworth was born on Wednesday March 4, 1931 to William and Fern Seaworth at the Hawkeye Ranch on Overland Trail north of La Porte CO. He passed away Friday November 29, 2019 at his home on North Taft Hill Road. When he was 6 years old he and his family moved to Greeley CO and farmed and fed sheep. In October of 1943 they moved back to Fort Collins where his parents purchased the farm on North Taft Hill Road, where he has resided since. Edgar graduated from Cache La Poudre High School in La Porte CO. He married his high school sweetheart, Beth Williams, on July 27, 1949. They were blessed with four children; Son Gary (Mike), and daughter Nancy (Sis) pre-deceased him, as well as his parents, one brother and two sisters. Survivors are his caregiver and wife of 70 plus years, Beth, daughter Connie (Steve) Roper, son Bill (Paulette), three grandsons, Doug (Nikki) Sipes, Alan and Willy Seaworth, one granddaughter Kristal (Travis) Brenden. One great-grandson Wyatt, 2 great-granddaughters, Jessie and Andilyn a great great-grandson, Dale, and many nieces and nephews, several cousins and a sister-in-law Alberta Lee. Edgar was a farmer, irrigating, raising sugar beets, corn and hay and fed sheep and cattle with his sons Mike and Bill. Retiring from that entity in the early 1980’s. In the late 1980’s he and son Bill started restoring old Hi-Crop and 2-cylinder John Deere and kids pedal tractors, which he greatly enjoyed until health issues forced him to retire in the fall of 2018. A memorial service for Edgar will be Thursday December 5, 2019 at 1:30PM at First Presbyterian Church with Pastor Corey Nelson officiating and Joe McConathy, organist. A reception will follow the service. The family is grateful to Pathways Hospice and Adam, Susan and Ray; also to Edgar’s physicians, Dr. Ben Girdler and staff, Dr. James Hoyt and staff, Dr. Stephanie Lockwood and staff, Dr. Steven Schuster and staff; the King Soopers Pharmacy staff on North College and the many friends, family and neighbors who so faithfully visited Edgar the past year. In lieu of flowers a memorial to the American Lung Association, Juvenile Diabetes Foundation, Pathways Hospice or a charity of your choice in care of Bohlender Funeral Chapel will be greatly appreciated.

Edgar B. Seaworth was born on Wednesday March 4, 1931 to William and Fern Seaworth at the Hawkeye Ranch on Overland Trail north of La Porte CO. He passed away Friday November 29, 2019 at his home on North Taft Hill Road. When he was 6 years... View Obituary & Service Information

The family of Edgar B. Seaworth created this Life Tributes page to make it easy to share your memories.

Send flowers to the Seaworth family.