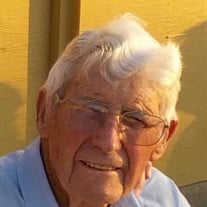 Earl Riser Lambeth, Jr. was born August 26, 1927 in DeQueen, AR. He was the oldest of six children. His father, Earl Sr. moved the family to La Sierra, CA when Earl, Jr. was a freshman in high school. Earl Jr. realized very quickly he did not like California and eventually used the military as a way out. He enlisted in the army the day he turned 18 and spent two years serving the country he loved. When he was discharged at the age of 20, a friend talked him into enrolling at Campion Academy, in Loveland, CO. Earl had learned to ski while in the army, so Colorado was a natural choice. He was elected president of his senior class. More importantly he met Enid Wilcox and knew he would marry her one day. They married on July 31, 1949 in Vineland, CO. Earl was a farmer at heart and enjoyed the years he spent working with his Father-in-Law, Bud Wilcox, on the farm. Lyle Robert was born in 1951, just before Earl and Enid moved to Boulder, CO. Earl worked at the University of Colorado as a welder in their Facilities Management department for 42 years. He specialized in arc-welding and enjoyed his job very much. David Charles was born in June of 1957, and Cheri Lynne in December of 1958. Earl was a devoted husband, having taken care of Enid for 22 years after she suffered a brain aneurysm. Enid passed away on Thanksgiving evening in 2010. Earl missed here every single day. He was also a devoted father, grandfather, and great-grandfather. He loved is “great grands” and they were able to bring a smile to his face like nobody else. He loved his family and his kids were his life. He was a dedicated deacon at the Boulder Seventh-day Adventist church for many years and volunteered his time and talents nearly full-time following his retirement. He also donated many hours to Boulder Junior Academy and then eventually Vista Ridge Academy in Erie. He loved serving hot lunch to the students, and became known as the best peanut butter sandwich maker around! Earl loved to stay busy and did so up until he simply wasn’t physically able to any longer. He moved from his beloved Boulder to Loveland in 2019 to be near his daughter Cheri and son-in-law Ted. He enjoyed being back on the campus of Campion Academy and loved attending the Campion Seventh-day Adventist church each week. Earl went to sleep in Jesus, October 25 following a long hospital stay. He will be missed by the many lives he touched over his 94 years. His family looks forward to seeing he and Enid together on that great resurrection morning. Earl will rest alongside Enid at the Fort Logan National Cemetery in Denver, CO. His service will be at the Campion Seventh-day Adventist Church on Sunday, November 14 at 2:00 p.m. He will then be laid to rest the following day, Monday, November 15 at noon.

Earl Riser Lambeth, Jr. was born August 26, 1927 in DeQueen, AR. He was the oldest of six children. His father, Earl Sr. moved the family to La Sierra, CA when Earl, Jr. was a freshman in high school. Earl Jr. realized very quickly he did not... View Obituary & Service Information

The family of Earl Riser Lambeth, Jr. created this Life Tributes page to make it easy to share your memories.

Send flowers to the Lambeth family.