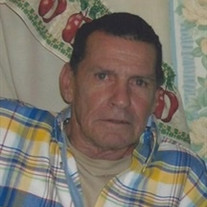 Earl “Butch” Raymond Bernard 75 of Wellington passed away March 12, 2020 at his home surrounded by his wife, son, sister, and 3 faithful dogs. Butch was born May 22, 1944 in Hawthorne, NV to Earl and Kathryn Bernard. The family lived up in Cherokee Park when Butch contracted polio in 1948. He was paralyzed from the chest down. He was placed in the Iron Lung capsule for a few months and then remained in the hospital for another 8 months. He did use leg braces and crutches to walk. Polio was a nuisance for him but he never let it get him down. Even if you thought he might not be able to do something, he would try and most of the time he would prove you wrong. Butch disliked school. His mom had a very hard time keeping him there. Once he was old enough to drive himself to school there were many days you could find him at his future wife’s house playing cards. He worked with his family in the timber business. He ran the CAT bulldozer, road grader, and the cherry picker. The cherry picker was where he felt at home. He unloaded and loaded timber, hay, and dug ditches. He could work magic with it. He enjoyed hunting and loved helping his dad with the guide service he ran over by Oak Creek. While over there when he was 14, he shot a 27-point mule deer that scored 234. He also hunted antelope and especially loved hunting pheasants. Butch and Judy met in the early 60’s. Butch ran around with Judy’s older brother Roger Amey. Butch and Roger use to cruise College Avenue in Roger’s ’55 Oldsmobile named “Screamin’ Brains.” Butch and Judy dated for awhile and then broke up. Years later they got back together and married on April 20, 1974. Judy has been his rock, carried him on her back, and has helped him through everything. He depended on her and she never let him down. They have been inseparable. From overhauling motors, working timber, selling firewood and Christmas trees, and then eventually ranching. On January 5, 1980 their family grew by 1. They had their son Earl Raymond Bernard III (Punkie as everyone called him). Starting as a toddler Punk would go to work with his dad. Butch and Punk did everything together….and I mean everything. In 1984 Butch and Judy bought their first 80 acres north of Wellington. In 1989 Butch quit the timber business and started focusing more on his cattle. As the years rolled on they acquired more land and more cattle. Butch’s favorite breed of cattle were Charolais but eventually agreed to raise some Black Angus. In 2000 after Judy retired, they moved out to the ranch. Together they built cow sheds, corrals, and other improvements. They built it from the ground up. He loved going out and mowing off the sage brush being careful not to run over the horned toads and baby jack rabbits. He reluctantly started helping Punk raise bucking bulls which continued the rest of his life. Butch was known to sit in the pickup with his shotgun just in case something went wrong while bucking the bulls. In 2009 Butch and Punk bought a 379 Peterbilt to haul hay. Butch became the “co-plot”. No matter where that truck went, Butch was in that passenger seat. They hauled hay from Walden together up until January of 2020. He loved seeing the wildlife on their hauls but especially the moose. Butch is survived by his loving wife Judy of 45 years, son Earl and wife Kristi, grandchildren Austin, Sydney, and Dalton. His sister Judy Novacek and husband Gary, and numerous nieces and nephews. He was preceded in death by his parents Earl and Kathryn Bernard, oldest sister Carol Dinkel, and youngest sister Earleen “Pete” Clark. His service will be held at 11:00 am on Thursday, March 19 at Bohlender Funeral Chapel. Viewing will be held at 10:00 am prior to the service. Interment will follow at Roselawn Cemetery. A special thanks to the nurses at Canyon West Hospice. In lieu of flowers please make a donation to Hospice.

The family of Earl R. Bernard created this Life Tributes page to make it easy to share your memories.

Send flowers to the Bernard family.