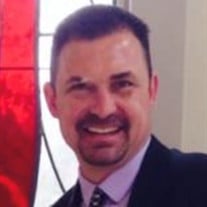 Douglas (Doug) J. Kokes, 52, died October 14, 2019 at UCHealth Hospital in Loveland, CO. A funeral service will be held at 11:00 a.m. Thursday, October 24, 2019 at Timberline Church, 2908 S Timberline Rd, Fort Collins, CO. Immediately following the service, there will be a light reception at the church. A private interment for the family will be held at the Grandview Cemetery. Friends are invited to join the family for a celebration of Doug’s life at Club Tico, 1599 City Park Drive, Fort Collins, CO from 5:00 to 8:00pm Thursday evening. Celebration to include a potluck meal with cash bar. Doug was born in Mt. Clemens, Michigan, December 21, 1966 to Thomas and Marcella Kokes. After several moves with the military, and the tragic loss of Doug’s mother, the family settled in Nebraska in 1978. Doug graduated from Bellevue East High School in 1985 and attended Kearney State. After college, Doug moved to Colorado and later began his career with the city of Fort Collins. Doug was a lover of all things sports, especially the Nebraska Cornhuskers. In high school he participated in gymnastics, swimming and diving. He was a true competitor with a zest for life. When he wasn’t spending time watching his son Caden compete at sports, you could find him playing softball, football, golf or bowling. Doug also spent time as a mentor and a coach. Doug was a Crew Chief with the city of Fort Collins for over 28 years and was proud of his involvement with Parks and Recreation. He made many friends during his years of service and played a big part in creating some of Fort Collins’ finest parks and resting places. He will be dearly missed by everyone who knew him. Perhaps Doug’s most important legacy will be the lasting impact he had on the many lives he touched. Doug was a gracious, giving, loving and joyous person. He freely shared those qualities with everyone who was blessed to know him, as they were manifest in his infectious smile, his heartfelt laugh, and the genuine joy that resonated throughout his very being. Doug is survived by his son, Caden Kokes; partner,Amy Holmes; mother, JoAnne Kokes, siblings, Connie (Jeff) Garrett, Tom (Heidi) Kokes, Michelle (Mike) Kieny, Martie (Chris) Peters, numerous nieces, nephews, and the Gillette family. Preceded in death by his parents.

The family of Douglas Joseph Kokes created this Life Tributes page to make it easy to share your memories.

Send flowers to the Kokes family.