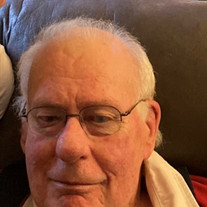 David Earl Manifold was born on July 1, 1935 in Bozeman, Montana to Ray and Olive Manifold. David passed away on December 30, 2021 just 2 ½ months after his beloved wife April. His family moved to Seattle, Washington soon after David was born and the family finally settled in the Arcata, California area when he was in elementary school. He graduated from Arcata High School in 1953. David loved music and played the bass drum in the high school band earning the nickname of “Boom Boom”. In October of 1955 he enlisted in the Army playing the bass drum in the Army band and being stationed in Italy. There was no active war at that time. He had very fond memories of his time stationed in Italy and traveling around Europe playing concerts. David met April Nadine Lantrip on a blind date. He had just been discharged from the Army and had returned to Arcata to work with his dad in the family business. He courted April in his red Ford pickup with horns that played “Mary Had A Little Lamb”. After a short courtship they wed on July 20, 1958. While David and April were on their honeymoon in Yellowstone, David’s father passed away. When they returned home David took over running the family business, Manifold’s Texaco. He was now a provider for both his wife and mother. David became a father with the birth of his first child, David Ray on September 4, 1959. Their second child, Julie Lynette, was born on August 3, 1962. David was a business partner with his wife during their 62 years of marriage. They owned and operated Manifold’s Texaco and then Eureka-Humboldt Fire Extinguisher Company. He was self employed his whole career and was a very hard worker, along with being an honest and smart businessman. He joined the Arcata Volunteer Fire Department in 1962. He was a very active volunteer serving 32 years in the department. He earned his EMT and worked his way up to Captain in his final active years. He was also an active member of the Jaycees, Arcata Chamber of Commerce, serving twice as the President, and a couple of different Kiwanis groups. He was a Boy Scout leader for his son’s Boy Scout troop taking them backpacking in the Marble Mountains a couple of times. He was well known and thought of in Arcata and surrounding communities with all of his service. The Arcata Fire Department was an escort to Air Force One in the 70’s when President Nixon and Lady Bird Johnson visited the Northern California area. David was a part of that escort. Every Christmas the Fire Department had a Christmas party for the children of all of the members of the department. Santa would make an appearance and give one gift, an orange, and a candy cane to each child. In his later years David would dress up as Santa for this party. He loved little kids. After retirement David and April followed their daughter to Colorado moving first to Eaton then Fort Collins. He was an avid 49ers fan and Humboldt State University football and basketball supporter. He had season tickets to the Humboldt State games for many years. When he moved to Colorado he joined the Colorado State University Spirit Committee helping serve at the tailgate parties at Hughes Stadium. David is survived by his daughter and husband, Julie and Andrew Dokoupil and grandson, John David Dokoupil. His step brother and wife, Dean and Shirley Meyer, and his step sister-in-law, Pat Meyer. His sister-in-law and husband, Terry and Bob Weir. Several cousins, nephews, nieces and their families. He was preceded in death by his wife, April, his son David Ray, his mom, dad, step father and step brother. A memorial service will be held at a later date. Memorial contributions can be made to the charity of your choice. Please go to bohlenderfuneralchapel.com to view an online obituary and leave condolences for the family

David Earl Manifold was born on July 1, 1935 in Bozeman, Montana to Ray and Olive Manifold. David passed away on December 30, 2021 just 2 ½ months after his beloved wife April. His family moved to Seattle, Washington soon after David was... View Obituary & Service Information

The family of David E. Manifold created this Life Tributes page to make it easy to share your memories.

Send flowers to the Manifold family.