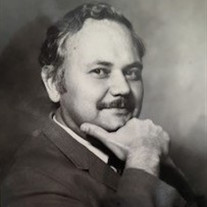 On the morning of Tuesday, April 13th, 2021 Curtis Albert Cramer died peacefully in his sleep at Lemay Avenue Health and Rehabilitation Center in Fort Collins. He was 82 years old. Curt was born in Lander, WY in 1939. His parents moved... View Obituary & Service Information

The family of Curtis Albert Cramer created this Life Tributes page to make it easy to share your memories.

Send flowers to the Cramer family.