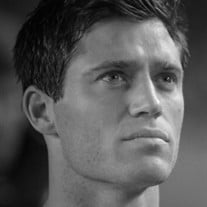 Colin Michael Clark left us at the age of 35 on Monday, August 26, 2019. He was born April 11, 1984 in Fort Collins on his due date and from that time on, we knew something special was happening. When he could barely walk, he wanted someone to throw a ball to him to hit or catch and he tagged along with his father to softball games, sitting with the team in the dugout. Then he met the older kids down the street and they taught him about soccer and using his left foot. The game changed at that moment and he would tell everyone he wanted to be a “professional soccer player” when he grew up. Weekends were spent watching him play for the Arsenal Soccer Club in Fort Collins, Colorado Rush in Denver and high school soccer at Fort Collins High. During this time, he also played on the Region 4 Olympic Development team in Colorado. Colin received many soccer scholarship opportunities for college, but chose to attend Southern Methodist University in Dallas because he knew many players from that program went on to play professionally. During the summers at home, he played with the Boulder Rapids Reserves team. Colin attended SMU for three years before the lure of playing professionally with the Colorado Rapids became too great. He signed with the team in 2006 and had a very successful career with them. In 2009, he earned one cap with the Men’s U. S. National team and was named the Rapids Humanitarian of the Year. He tore his ACL on the left knee in 2009 in practice and sat out the remainder of the season. The second ACL tear in the same knee led to his trade to the Houston Dynamos before the Rapids went on to win the MLS Cup in 2010. He played with Houston for two seasons and finished his career with the LA Galaxy in 2013, after his childhood idol David Beckham retired from the Galaxy. He earned a “B” Coaching License, returning to coach for his former club Colorado Rush and later joined the Storm as a coach. Colin still played soccer on the weekends with Rush and the Kickers. He continued to follow his beloved Manchester United Reds, The Ohio State Buckeyes, the Colorado Rapids and other Denver pro teams. When Tyce started playing soccer, Saturdays at the field began again. Colin leaves behind his parents, Ken Clark and Sherry Albertson-Clark, his brother Spencer, son Tyce (and mother Dana Clark), and Grandmother Shirley Albertson; 12 aunts and uncles; and numerous cousins and friends around the world all who loved him dearly. He was a member of Trinity Lutheran Church in Fort Collins. Colin touched many lives, whether it was coaching young soccer players, or the fans who enjoyed watching him work the ball with his left foot. So, whenever you pass a soccer field and see a team playing, or see someone dribbling a soccer ball, please smile and think of Colin. He had undiagnosed heart disease and suffered a heart attack. If you have a family history of heart disease, please make sure to get your blood pressure and cholesterol checked and pass this information on to others. It could save a life. A memorial service will be held on Wednesday, September 18 at 7:00 P.M. at Dick’s Sporting Goods Park in Commerce City, Colorado. Soccer or casual attire is appropriate. In lieu of flowers, please consider making a donation to the Arsenal Colorado Soccer Club Scholarship in memory of Colin Clark. O – H! I – O!

Colin Michael Clark left us at the age of 35 on Monday, August 26, 2019. He was born April 11, 1984 in Fort Collins on his due date and from that time on, we knew something special was happening. When he could barely walk, he wanted someone... View Obituary & Service Information

The family of Colin Michael Clark created this Life Tributes page to make it easy to share your memories.

Colin Michael Clark left us at the age of 35 on Monday, August...

Send flowers to the Clark family.