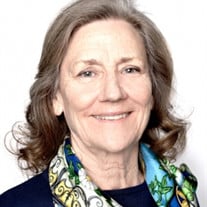 Charlotte L Corbit, 77, of Bellvue, Colorado, and Salt Lake City, Utah, passed away on February 7, 2020 surrounded by her family. Charlotte Ann Larsen was born on February 23, 1942 to the late Raynor and Laura (Pulley Beck) Larsen in American Fork, Utah. She had a happy childhood that included climbing apple trees, riding bikes and playing cowboys or Tarzan with the boys on King Street (Char was always Tarzan). She loved riding horses bareback, going to the movies, helping in the large family garden, and sleeping in the back yard with her sister Jeanné during the summer. She enjoyed picnics with the family and road trips with Louise and Jeanné. When Char was nine years old, she became a Girl Scout and at eleven she attended Trefoil Ranch Girl Scout Camp. Char’s experiences as a child in Girl Scouting changed her world view and inspired her vocation. As a teen, Char, her best friend Ruth (Parker) Rudick, and their friends went to all the dances, football and basketball games and movies, and frequented Fagen’s Malt Shop and Don’s Sweet Shop. Char was active in the pep club, track team, dance team, and yearbook staff, all while working to help support the family. Char graduated high school and married her high school sweetheart, Bill Finney, in 1960. They had three children. Char and Bill divorced in 1977 but remained friends and shared holiday and family celebrations together. While her kids were growing up, Char was the coolest mom around, so all her kids and their friends hung out at the Finney house. Char said, “My children and I grew up together; we spent our time together; we skied, we played, we studied together.” During this time, Char volunteered with the Utah Democratic Party and served as PTA president at her children’s school. Char was a Girl Scout troop leader for many years and held several additional volunteer positions with Girl Scouts of Utah. She helped girls develop their full individual potential, while mentoring other adults to do the same. In 1977, Char was asked to work for the Girl Scouts of Utah, which she did passionately for 33 years. She held many positions in the organization, with most of her time focused on Camp and Property. Char often dressed up as Juliette Gordon Low, the founder of Girl Scouting, to teach girls about the history of the organization. Char received the Thanks Badge and the Distinguished Alumna Award and was inducted into the Association of Girl Scout Executive Staff Hall of Fame. Her proudest accomplishments were designing and building the lodges and cabins at Camp Cloud Rim and Trefoil Ranch. These girl-friendly facilities will provide a magical backdrop for girls to flourish in decades to come. Char also leaves an enormous legacy in the thousands of lives she touched. Char married Mark Corbit in 1978; they divorced; she kept the last name. Char married Bill Blanchard in 1983; they divorced after many years. The Blanchard children and grandchildren remained a very special part of her life. Char married Jennifer Blakesley in 2015. Jennifer was also a Girl Scout and their compatibility and love was palpable. Char loved to entertain family and friends, and everyone was always welcome for a warm meal, a drink and good conversation. Char was loving, funny, strong, smart, athletic, kind, charismatic and generous. Her smile was easy and genuine, and she was quick to laugh. She loved to ski, golf, hike, boat, travel, backpack and snowshoe. She loved all kinds of music, daisies, and a good beer. She loved animals and shared her life with many dogs (Ring, Rusty, Tip, Prince, Pansy, Daisy, Jen-Jen, Max, Zodie, Chance, Xena, Seymour, Rocksie), Cats (Mother Cat, Blossom, Tasha) and a Turtle (Sparky). Char treasured the time she got to spend with her grandchildren. She spent many days taking them to movies and toy stores, playing outside and attending their school and sporting events. Char hosted countless grandkid sleepovers and “pajama days.” Char loved celebrating Christmas, taking the kids to The Nutcracker, decorating the whole house, and hosting her annual Christmas Eve parties. After Char’s retirement, she and Jennifer took numerous camping trips in their little travel trailer. Favorite destinations included national parks in seven western states, and state park beaches in Oregon. They traveled together to New Zealand, Denmark, Costa Rica, Mexico, Italy and France. For ten years, they organized the Silver and Gold Friendship weekend, snowshoeing with friends into Camp Cloud Rim, with registration costs going to the Char Corbit Campership Fund at Girl Scouts of Utah (a fund established upon her retirement from GSU). Char lived with Stage IV lung cancer for her final 5½ years, enduring surgeries and chemotherapy infusions with remarkable grace. Before and in between chemotherapy and grand adventures, she heartily enjoyed simple pleasures such as watching birds and sunsets and sharing stories, laughs and wisdom with friends and family. She maintained a heart full of gratitude to her final days. Char is survived by her spouse, Jennifer Blakesley, daughters, Jill (Van) Johnson, Jean (Kenton) Smith, son James Finney, daughter-in-law Michelle Finney, her grandchildren, Jane (Carter) Craigo, Evan Finney, Delaney Smith, Shea Johnson, Aaron (Britni Smith) Johnson, and Quinn Johnson, her sisters Jenna Worthen, LaRae Nelson, Jeanné (Elliot Duncan) Larsen, father of her children, Bill (Lisa Smith) Finney and many cherished nieces and nephews and friends. She was preceded in death by her brother Douglas Larsen, and sister Louise Nerney. Char’s family is grateful to the staff of Pathways of Northern Colorado, especially nurse Adam Federer, for Char’s Hospice care. Char’s family will host a Celebration of Life on March 14, 2020 from 2 PM – 5 PM at the Salt Lake City Marriot University Park, 480 Wakara Way, SLC, UT 84108. Char’s family suggests honoring her by empowering girls to achieve their dreams. One way to do this is to contribute in her name to the Char Corbit Campership Fund at Girl Scouts of Utah: Visit www.gsutah.org and click on “donate”.

The family of Charlotte L. Corbit created this Life Tributes page to make it easy to share your memories.

Send flowers to the Corbit family.