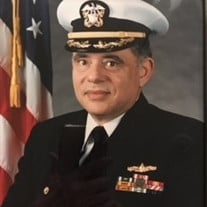 Charles Natale Calvano died on June 30, 2021. Chuck was born on September 21st, 1941, in Chicago, Illinois to John and Mary Furticella Calvano. He graduated from Mendel Catholic High School in Chicago in 1959 and received an appointment to the United States Naval Academy. While there, he served as Company Commander and was in the 8th and 10th Companies. Chuck graduated the Naval Academy with honors in 1963. His first assignments as an officer from 1963 to 1967 were aboard the USS Davis followed by the USS Moale. From 1967 to 1970 Chuck attended Massachusetts Institute of Technology where he earned a Master of Science in Ocean Engineering and the Professional Degree of Naval Engineer. Subsequent tours included Ship Superintendent and Docking Officer at Boston Naval Shipyard, and Advisor at the Naval Supply Activity in Saigon, Viet Nam. For the next fourteen years, Chuck served in the field of ship construction at Boston Naval Shipyard, Supervisor of Shipbuilding Newport News, Commander Naval Surface Atlantic Fleet, Norfolk, and then Supervisor of Shipbuilding, Portsmouth. From 1983 to 1986, Chuck served as the Officer in Charge of the David Taylor Research Center in Annapolis, Maryland, followed by a three-year tour as Commanding Officer of the Engineering Duty Officer School in Mare Island, California. His penultimate tour in Federal Service and final tour on active duty in the Navy was as the Director of Ship Design, from which he retired in 1991. In 1991 Chuck was employed by the Naval Postgraduate School in Monterey, California, where he created and taught a Total Ship Systems Engineering curriculum. He retired from Civil Service in 2000 and traveled to the UK where he taught for one year at the Royal Military College of Science in Shrivenham, England. He returned to the Naval Postgraduate School from 2001 until 2004 before returning to England for three years to work for the London Office of Naval Research. While in London he served as a worldwide technical talent scout seeking new technologies invented by foreign countries which would benefit the U.S. Navy. In 2005 he was elected to the class of Fellows of the Royal Institution of Naval Architects. At the end of his London assignment, he returned to the Naval Postgraduate School where he was designated Professor Emeritus. Chuck and his wife, Kathi, moved to Fort Collins, Colorado, in 2012. He is survived by Kathi, his devoted wife of 38 years, as well as four daughters, Cathleen Antolick and husband Brian, of Wenonah, New Jersey, Julie Tolby of Phoenix, Arizona, Karissa Calvo and husband, Dante, of Jacksonville, Florida, Jill Kumm of Fort Collins, Colorado, and three grandchildren, Tyler Tolby of Phoenix, Arizona, Ayelen Calvo and Gianna Calvo of Jacksonville, Florida. He was preceded in death by his father, John Calvano, his mother, Mary Calvano, and his sister, Concetta Calvano. Chuck was an intellectual all of his life, always loving education and learning. He was extremely well-read and loved history, science and math. He also loved traveling the U.S. and the world, having visited all 50 states and over 60 countries. He devoted his life to his family and his country and was called “a national treasure” by his colleagues at the Naval Postgraduate School. He will be missed by family and friends, of which he had many. A funeral service will take place at St. John’s Lutheran Church, 305 E. Elizabeth St., Fort Collins, on Saturday, July 17, 2021, at 11:00 a.m. The service will also be streamed at the church’s website, www.stjohnsfc.org. Chuck will be interred at the United States Naval Academy in Annapolis, Maryland, at a later date. Memorial gifts in Chuck’s memory may be made to The Alpha Center, 1212 S. College Avenue, Fort Collins, CO 80524.

Charles Natale Calvano died on June 30, 2021. Chuck was born on September 21st, 1941, in Chicago, Illinois to John and Mary Furticella Calvano. He graduated from Mendel Catholic High School in Chicago in 1959 and received an appointment to... View Obituary & Service Information

The family of Charles Natale Calvano created this Life Tributes page to make it easy to share your memories.

Send flowers to the Calvano family.