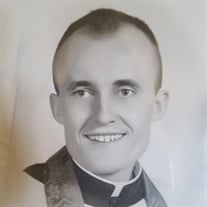 Dr. Byron Ralph Swanson was born on Earth Day, April 22, 1930 in Omaha, Nebraska, Byron Ralph Swanson was an enthusiastic environmentalist way before his time! He spent his life recycling, composting, saving water and picking up trash – and the world is a more beautiful place because of his care and compassion for the earth! The son of Ralph and May Swanson, and younger brother of Ellie, Byron went to Rose Hill Elementary School and graduated from Omaha Benson High School. He and his lifelong friend, Warren Buffett, had plenty of adventures in middle school – including a disastrous triple date in 8th grade! Byron attended the University of Nebraska for one year before transferring to Augustana College in Rock Island, Illinois. Although he became a Viking, and graduated from Augustana in 1952, he remained a loyal Nebraska Cornhusker fan all his life. After college, Byron went to Augustana Seminary and became an ordained Lutheran pastor in 1956. He met Kathryn Segerhammar, and it was love at first sight! They were married October 26, 1956 in Los Angeles California, and began their married life in Gladstone, Missouri where Byron’s first parish, St.Timothy Lutheran Church, met in the basement of the parsonage. Kim and Tim were born in Kansas City, before they moved to New Haven, Connecticut in 1960, where Byron got his Masters of Sacred Theology at Yale Divinity School. Needing an extra foreign language class before pursuing his doctorate, Byron and Kathryn moved to Tempe, Arizona, where he worked in Campus Ministry at ASU and took a year of German! Todd was born in Mesa, Arizona. After a year in Arizona, they moved back east to Princeton, NJ, where Byron worked on his doctorate at Princeton Theological Seminary. They spent six fun years in Princeton, and their fourth child, Brad, was born in Trenton, New Jersey. During that time, the family moved to Sweden for six months, where Byron did research for his dissertation on Archbishop Nathan Soderblom and the Ecumenical Movement. With a PhD in Theology, Byron was hired as a Professor of Religion at Midland Lutheran College in Fremont, Nebraska. So, once again, the family packed up and moved across the country! Fremont was home for the Swanson family from 1968 until 1979 when they moved to Thousand Oaks, California, where Byron was a Professor of Religion at California Lutheran University. Teaching Theology, Church History and the Reformation, Christian Ethics, Environmental Ethics, and Peace and Justice were some of his favorite courses, and he was passionate about the subjects and his students. He loved his Lutheran heritage but was accepting of all religions and encouraged students to explore other beliefs and be open to other perspectives. Byron encouraged his children and his students to find their passions and follow them. His passion and commitment to his own vocation and calling – his ministry and teaching –touched many lives. His life of love, service and graciousness was a living example for all. Byron once said, he was “Hooked on Grace!” God’s gift of grace and acceptance ran through every bone in his body and shone brightly through his huge smile! Byron never met a stranger – everyone he talked to had an interesting story, and he wanted to hear it! After retiring from CLU, Byron and Kathryn moved to Fort Collins, Colorado in 2001 to be close to their children and grandchildren and their beloved family ranch in Red Feather Lakes. He quickly developed new friendships in Fort Collins through their church – Shepherd of the Hills, the Men’s Discussion group, his special BBB (Beer, Books and Bible) group and the Exercise group at CSU. Each time they moved -to the Worthington, New Mercer and Centre Nursing Facility – he met new friends! Byron was a sports enthusiast – his favorite football team was the Nebraska Cornhuskers and his favorite baseball team the LA Dodgers! He was fond of anything Swedish, he loved spending time with his family, going to concerts and plays, playing racquetball and handball, gardening and composting, horseback riding, biking, canoeing, throwing frisbees and traveling. He and Kathryn traveled all over the world – both with college students and after they retired. When he was diagnosed in 2012 with Multiple Systems Atrophy, he handled the cruel disease with strength and grace. Always active and moving, Byron’s last years were confined to a wheelchair. And, although he spoke for a living as a pastor and professor, he lost his ability to communicate verbally. However, his eyes and his big smile spoke a thousand words, and no one will ever forget his thumbs-up! Byron Swanson, Child of God, passed away peacefully surrounded by family on October 24, 2017, shortly after the Dodgers scored a homerun in the first game of the World Series! He loved deeply and was deeply loved in return by so many. Byron leaves behind the love of his life - his wife Kathryn, and four children, Kim (Dave) Guinn, Tim (Lee) Swanson, Todd (Heidi) Swanson and Brad (Mary) Swanson, six grandchildren Andy Guinn, Katy Guinn, Ben Moening-Swanson, Isaac Moening-Swanson, Kiah Swanson and Riley Swanson, six siblings–in-law, many nieces and nephews, and friends all over the world! In lieu of flowers, memorials may be sent to Augustana College, 639 38th St. Rock Island, IL 61201; Bethany College, 355 E. Swensson St.Lindsborg, KS 67456; or the ELCA World Hunger Appeal Evangelical Lutheran Church in America/ELCA Gift Processing Center /P.O. Box 1809/ Merrifield, VA 22116-8009 Services will be 11/11 at 11:00 am at Shepherd of the Hills Lutheran Church, 1200 S. Taft Hill Road, Fort Collins, CO.

The family of Byron Swanson created this Life Tributes page to make it easy to share your memories.

Send flowers to the Swanson family.