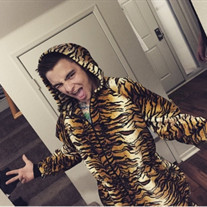 The number of people wanting to attend the service is growing to where it may surpass our permit allowance for COVID safety. Since we must limit those who wish to attend, we ask that if you did not personally know Brendan, to attend via a live stream of the service. Further details will be posted, so please watch the Larimer County website at www.Larimer.org. We appreciate your support and care even if you are not attending in person. Sincerely, The family of Brendan Unitt Brendan Patrick Unitt, 27, of LaSalle, CO died while in service as a Park Ranger at Horsetooth Reservoir the evening of Thursday, August 20th, 2020. He was born in Denver, Colorado to Katherine McAneny of Louviers, CO, and Christopher Unitt of Sedalia, CO. Brendan’s younger sisters, Hannah Elizabeth Hammel and Madalyn Dell Unitt complete this family of five. Brendan graduated Windsor High School in 2011. During this time he participated in many activities, gained attention and admiration for choir, wrestling and for just being himself. Among his achievements were representing the Windsor High School Wrestling team in the Colorado Sate Championships in 2010 and 2011. From July 24th, 2011 to July 24th, 2015, Corporal Unitt honorably served his country in the United States Marine Corps. Brendan’s bravery and selflessness continued to guide his path after he was honorably discharged. Brendan graduated from CSU in May of 2019 with a bachelors degree in Psychology. He then set his sights on his next goals, and while volunteering for the Rocky Mountain Raptor program, he applied to be a Colorado State Park Ranger. Earning his badge on May 20th, 2020. He was paving the path to fulfilling his dream of serving and protecting others through joining the police force, and had begun Colorado Peace Officer Standards and Training at AIMS Community college. Brendan is survived by both parents, Chris and Katy, both sisters, Hannah and Maddy, brother-in-law Ian Hammel, Grandparents John and Sarah McAneny of Castle Rock, CO, Grandparents Charles and Diane Unitt of Grand Junction, CO, Uncle Chad, Uncle Dan, Aunt Megan, Uncle Casey, and many extended family members. He is also survived by his precious nephew, Grayson Hammel. Brendan leaves behind his beloved girlfriend and partner, Scraine Griffin and her family who welcomed him as a member of their family. Scraine, her sister Kyrah and their parents Cori and Eric of LaSalle, CO are grieving the loss of this caring and dedicated young man, leaving a hole in their lives as well. Brendan’s light continues to shine through all of the communities he’s been a part of, and all of the people who have been a part of his life. Please clink on the link for details for the procession that will start at 12:45 p.m. on Friday, August 28, 2020 at Bohlender Funeral Chapel. https://www.larimer.org/spotlights/2020/08/25/honor-procession-pay-tribute-ranger-brendan-unitt.

The number of people wanting to attend the service is growing to where it may surpass our permit allowance for COVID safety. Since we must limit those who wish to attend, we ask that if you did not personally know Brendan, to attend via a live... View Obituary & Service Information

The family of Brendan Patrick Unitt created this Life Tributes page to make it easy to share your memories.

The number of people wanting to attend the service is growing...

Send flowers to the Unitt family.