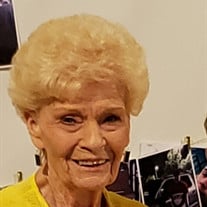 Beverly Ray (Aldrich) Capps of Fort Collins passed away at Poudre Valley Hospital on May 26, 2022. Beverly was born in Eads, Colorado on October 12,1939 to Don and Barbara (Bailey) Aldrich. Beverly was the third of eight siblings and a twin to her sister Barbara. Beverly spent her childhood growing up in Eads where she participated in the Methodist Youth Fellowship, played alto saxophone, sang in the school choir and participated in 4H. As a teen, Beverly worked as a waitress and did odd jobs around the community. Beverly graduated from high school in May 1957 and married Robert Greenwell of Eads In December 1957. Beverly continued her participation in school events by hosting many school staff dinners and parties and continued to be a vital part of her close family while starting her own. Beverly’s first son, Leonard Don was born a year after she was married. Two more boys, Timothy Lee and Michael L came along shortly after. Just before moving to their new home in Berthoud in 1965, Beverly delivered the family’s first daughter, Lori Ray. Their new life in Berthoud elevated Beverly’s love to serve and fellowship with community members by continuing to host dinner parties in her home after school events, sing in the First Presbyterian Church choir, teach Sunday School and develop life-long friendships. Beverly worked and volunteered in the elementary school helping children with their reading skills for many years until Beverly’s second daughter (fifth child), Amy KayLene was born. In 1978, the family moved a few miles north to Loveland, Colorado. In 1980, Beverly began a career with Colorado State University’s Continuing Education Department as a “Program Specialist”. Beverly worked in the Continuing Education Department for 24 years, working her way up to become the Director of Non-Credit Courses for CSU. In July 1985, Beverly married Tom W. Capps, whom she remained married to for 28 years until Tom’s death in January 2014. Beverly retired from CSU on July 1, 2004. During retirement, Beverly continued her life-long love and devotion of doting over her husband, siblings, children, grandchildren and great-grandchildren. Beverly was passionate about the Denver Broncos and her vast array of Denver Bronco mementos. Beverly was kept company by her dogs Jewel and Bosco, whom she loved deeply. Surviving members of Beverly’s family are her son Michael (Shelly) Greenwell of Littleton, CO, daughters Lori (Gary) Jensen of Loveland, CO, Amy Greenwell-Romero of Littleton, CO, daughter-in-law Kathy Greenwell of Billings, MT, step-son Todd Capps (Loveland, CO), sisters Joyce Moody (Rohrersville, MD), Donna Friedman (Ft. Collins, CO), twin sister Barbara Uhland (Eads, CO), Sandy Mihich (Ft. Collins, CO), Cindy (Don) Smith (Ft. Collins, CO), Pamela (Ron) Weinzaphel (Copperas, TX) and the only brother to all these sisters, Don Aldrich (Wellington, CO). Beverly had fifteen grandchildren and twenty-three great-grandchildren, as well as many, many nieces, nephews, great-nieces and great-nephews whom she adored. Beverly always remembered the birthdays of her family members and enjoyed choosing a special birthday card for each one. Beverly was preceded in death by her parents, Don and Barbara Aldrich, sons Timothy Lee Greenwell (1979) and Leonard Don Greenwell (1992), husband Tom Capps (2014) and step-son Tedd Capps. A service will be held on June 8, 2022 at 1:00 pm at the Bohlender Funeral Chapel in Ft. Collins, CO, and also in Eads, CO, at the First United Methodist Church on June 11, 2022 at 1:00. The family asks that guests attending in person wear Denver Broncos or bright colors to the service. Contributions may be made to the Larimer County Humane Society in care of Bohlender Funeral Chapel, 121 W. Olive, Fort Collins, Colorado 80524. https://fb.watch/dADMbkQyZ9/

Beverly Ray (Aldrich) Capps of Fort Collins passed away at Poudre Valley Hospital on May 26, 2022. Beverly was born in Eads, Colorado on October 12,1939 to Don and Barbara (Bailey) Aldrich. Beverly was the third of eight siblings and a twin... View Obituary & Service Information

The family of Beverly Ray Capps created this Life Tributes page to make it easy to share your memories.

Send flowers to the Capps family.