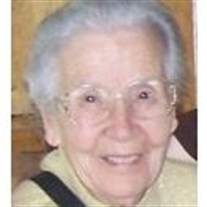 Bettie Jean Tomasini passed on Saturday, April 11, 2020. She was born December 16, 1925 – along with her sister Dorothy Jane as one of the first, or maybe even the first, set of twins born at Eben Ezer Hospital in Brush, Colorado. She and Dorothy grew up in Brush with parents Hugh and Maud Bolinger and sister Mary Elyn. On August 21, 1943 she and Almo (Tommy) Tomasini were married in Louisville, Kentucky where Tommy was stationed in the army. Tom and Bettie lived in many different states, but always considered Colorado to be their home. Bettie worked throughout her life as a secretary and bookkeeper mostly in healthcare. Idle hands were her nemesis. After working 9-5, she would come home to clean, work in the yard, or knit and crochet – the lady did not like to cook! Her family and her animals were her greatest joy. She lived the last 40 years of her life on a farm in Ft. Collins where she could be close to both family and a menagerie of animals. Bettie had a sparkle in her eyes that betrayed an orneriness and wit that kept her family both laughing and on their toes! She is survived by her sons Don (Jean) of Kittredge, CO and Mike (Ruth) of Ft. Collins and her grandchildren and great grandchildren Rhonda (Kent) Robinson, Meagan, Justin, and Michael of Wellington, CO. Ron (Stephanie) Tomasini of Ft. Collins, Josh, Emily, and Nick. Cindy (Pete) Sprenger of Auburn, WA, Madeline. Julie (Marc) Casto, of San Jose, CA, Elenora and Abigail. In lieu of flowers, please make a donation to the Colorado Human Society, or the charity of your choice in her memory. Please send donation checks in care of Bohlender Funeral Chapel, 121 W. Olive, Ft. Collins, CO 50524

Bettie Jean Tomasini passed on Saturday, April 11, 2020. She was born December 16, 1925 &#8211; along with her sister Dorothy Jane as one of the first, or maybe even the first, set of twins born at Eben Ezer Hospital in Brush, Colorado. She... View Obituary & Service Information

The family of Bettie Jean Tomasini created this Life Tributes page to make it easy to share your memories.

Send flowers to the Tomasini family.