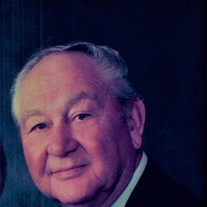 Arthur Leroy Meyer of Wellington, CO passed away unexpectedly Tuesday, Oct 8th at Medical Center of the Rockies. Art was born June 16, 1930 to George Meyer and Eva Schmunk Meyer in Waverly, Colorado, the fifth of six children. He grew up in the area attending Waverly Schools graduating as valedictorian of his senior class. After graduation he was drafted into the Army and served in the Korean conflict. Upon return he met and married Marilyn Schmer on June 28, 1953. Then began a marriage that lasted until her death on October 15, 2015. Art and Marilyn farmed in the Waverly, Buckeye, and Wellington areas until retirement. During his years of farming Art received numerous awards for Grower of the Year for both sugar beets and barley. Always active, he started buying and restoring tractors, a pastime he truly loved. The family is grateful he left this Earth doing something he had a great passion for. Arthur and Marilyn were faithful attendees of Timberline Church, making a multitude of friends and acquaintances. Saturday evenings were normally reserved for dinner at the Charco Broiler where they enjoyed family and friends. Art and Marilyn enjoyed traveling on cruises and trips to California and other places. In May of 2017 he was honored to participate on the Northern Colorado Honor Flight to Washington DC – a trip he thoroughly enjoyed. A highlight was meeting Vice President Pence. He is survived by his son Allan Meyer (Beverly) of Fort Collins, son Terry Meyer of Highlands Ranch, grandsons Ronald Meyer (Shannon) of Hemlock MI, Brent Meyer (Kelly) of Frederick , Ryan Meyer of Denver, Nathan Meyer (Tammy) of Denver, and Bradley (Ashley) Meyer of Fort Collins and 7 great grandchildren. Also, surviving are sister Rufina Kaltenberger of Windsor, brother-in-law Charles Holtcamp of Clovis, NM, and sister-in-law Carol (Chuck) Winter of Fort Collins. There are many nieces and nephews that treasured having Art as an uncle. Preceding him in death are parents George and Eva, sister Leona Kline, brother Harry Meyer, brother Lenard Meyer, and sister Shirley Holtcamp. The family wishes to thank the many neighbors and friends who visited with Art over the last few years discussing farming, tractors and life in general. He did love to visit. A Life Celebration will be held at 10:30 a.m., Friday, October 18, 2019 at Timberline Church, South Auditorium, followed by a reception and then a Graveside at Grandview Cemetery. In lieu of flowers contributions can be made to St. Jude Children’s Research Hospital.

Arthur Leroy Meyer of Wellington, CO passed away unexpectedly Tuesday, Oct 8th at Medical Center of the Rockies. Art was born June 16, 1930 to George Meyer and Eva Schmunk Meyer in Waverly, Colorado, the fifth of six children. He grew up in... View Obituary & Service Information

The family of Arthur L. Meyer created this Life Tributes page to make it easy to share your memories.

Send flowers to the Meyer family.