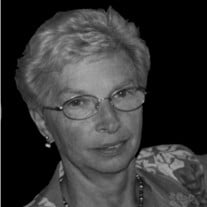 Ann Louise (Goodwin) Easterbrook 1939-2020 Ann Louise Easterbrook passed away peacefully after a long illness on 22 May 2020, at 80 years of age. She was born on 24 Sep 1939 in St. Johns, MI, the eldest child of Kenneth Clayton Goodwin and Ruth Rowena (Fletcher) Goodwin. She grew up primarily in and around Horton, MI. On 29 April 1967 she married Arthur Lyman Easterbrook, son of Ralph Lewis Easterbrook and Hope Gertrude (Knights) Easterbrook. They were married for 53 loving years and raised two sons, Gregg Arthur Easterbrook and Richard Brian Easterbrook in Cadillac, MI, Washburn, WI, Winona, MO and Gladstone, MI. In retirement, Art and Ann fled the rough winters of Michigan’s Upper Peninsula and became snowbirds in their fifth-wheel trailer, seeking the sun in/around LaBelle and Clewiston, FL and following their kids and grandkids around the world. They finally moved to Fort Collins, CO to be closer to family with Ann’s illness. While Ann was primarily engaged as a loving wife and mother, she was very wise and practical. At various times she worked at the former Jacobson’s Department Store in Jackson, MI, for H & R Block during tax season in Escanaba, MI and for the United States Postal Service as a Rural Carrier Associate. Ann is preceded in death by her parents and brother, David Goodwin. She is survived by her husband Art, who lovingly took care of her through a lengthy illness, her brother Edward Clarence Goodwin, her sons Gregg and Richard, and two daughters-in-law, Ana (Morina) Easterbrook and Jennifer Coates. She was also blessed with five grandchildren, who she admired, and all survive her: Jessica Jade Easterbrook, Saranda Alexis Easterbrook, and Eric Henry Easterbrook of Dayton, OH and Renee Coates Easterbrook and David Coates Easterbrook of Fort Collins, CO. Ann and Art were blessed with the opportunity to travel the country and world. During that time, Ann made many wonderful friends too numerous to mention here, but she cherished these relationships with many wonderful people. Ann always believed that what really mattered was the quality time you spent with a person in life, not how you honored them after death. In light of that, and due to social distancing rules, the family will not be holding a funeral or memorial service at this time. In lieu of flowers, donations can be made in Ann’s name to the Lewy Body Dementia Association: https://www.lbda.org/honor-memorial-gifts or Pathways Hospice Care of Fort Collins: https://pathways-care.org/ways-to-give/.

Ann Louise (Goodwin) Easterbrook 1939-2020 Ann Louise Easterbrook passed away peacefully after a long illness on 22 May 2020, at 80 years of age. She was born on 24 Sep 1939 in St. Johns, MI, the eldest child of Kenneth Clayton Goodwin and... View Obituary & Service Information

The family of Ann Louise Easterbrook created this Life Tributes page to make it easy to share your memories.

Send flowers to the Easterbrook family.