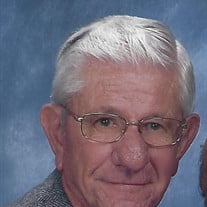 Alvin Dale Schwindt passed away on January 25, 2020. He was a loving husband, father, grandfather and loyal friend and neighbor. He was born on March 28, 1930 in Fort Collins, Colorado and graduated from Fort Collins High School in 1948. In 1949 he married the love of his life, Lorraine Kaltenberger. They celebrated 70 years of marriage in December 2019. Alvin and Lorraine farmed outside of Fort Collins for 32 years until they moved into Fort Collins in 1982. His biggest regret in his final years was losing the ability to dance the night away at the weekly dutchops. He and Lorraine could be found at the dances on the weekends for 30 years. He loved music and his kids and grandkids remember him dancing around in the living room to his favorite records. When Alvin and Lorraine moved into town they never could have guessed they would form the neighborhood community that they did. Alvin set the bar with his meticulous yard and could be seen a few times a week out on his riding lawn mower. At the end of a beautiful day, you could find Alvin and Lorraine sitting out in their driveway, ready to chat with any neighbors who stopped by. Alvin was a giant of a man who had a profound impact on everyone he met. He always made time for his family, was there to help a friend in need, and adored his grandchildren. His grace, generosity, and infectious smile will be missed. Alvin is survived by his loving and devoted wife, Lorraine of 70 years; daughter, Gayle Ann Schwindt (Larry Thomas) of Windsor, CO, son, Bradley Schwindt of Greeley, CO; grandchildren, Lisa (Robert) Eakins of Elgin, Oklahoma, Sarah Armstrong (Dan Belknap) of Seattle, Washington, and Michael Schwindt of Jackson, Mississippi. He is preceded in death by his parents, John and Katherine Schwindt and an infant sister, and two sons. Please direct any donations to the Plymouth Congregational Church in care of Bohlender Funeral Chapel, 121 W. Olive, Fort Collins, CO 80524. A Memorial Service will be held at 11 a.m., Saturday, February 1, 2020 at Plymouth Congregational Church, 916 W. Prospect. Luncheon to follow.

Alvin Dale Schwindt passed away on January 25, 2020. He was a loving husband, father, grandfather and loyal friend and neighbor. He was born on March 28, 1930 in Fort Collins, Colorado and graduated from Fort Collins High School in 1948. In... View Obituary & Service Information

The family of Alvin D. Schwindt created this Life Tributes page to make it easy to share your memories.

Send flowers to the Schwindt family.