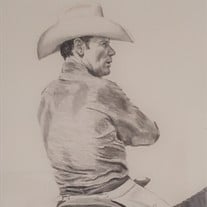 William (Bill) Franklin Murphy went to be with his Heavenly Father on November 25, 2019, following a brief illness. He was born on November 7, 1933 in Thurman, CO to John and Dorothy Murphy. Bill was blessed to be raised with 15 brothers and sisters. At the age of 18, he proudly joined the United States Air Force. Bill was a talented baseball player. Throughout his Air Force career, he played ball. Later, he played minor and professional baseball for the Philadelphia Phillies. This led to an opportunity to make baseball his career; however, Bill chose to follow his dream of training horses. He married Florene Hester in 1955. They had three daughters, Tina Sutton, Tammy Boizot and Terrie Murphy. In 1973, Bill married Stefanie Williams. Together they had two children, Billy Murphy and Dixie Ryon. Through the years, his passion for horses was multifaceted. Bill was a jockey at an early age, a race horse trainer, a trainer and a showman within the American Quarter Horse Association (AQHA) and the American Paint Horse Association (APHA) in halter and western events. He eventually specialized in cutting horses and was an active member of the APHA, Western States Cutting Horse Association (WSCHA), Pacific Coast Cutting Horse Association (PCCHA), Arizona Cutting Horse Association (AZCHA), Montana Cutting Horse Association (MCHA) and the National Cutting Horse Association (NCHA) as well as serving as a judge for the NCHA and other associations. Bill produced cutting horse events in the state of Montana, showed at the NCHA futurity and other aged events. He showed and trained many great horses and mentored many successful non-pros. His children were an important part of his horse career and followed his love for horses. Bill never went anywhere without his horse trailer. He lived life to the fullest and was a true horseman. Bill will be most remembered for his work ethic, determination and love of family and the Lord. He is loved and will be deeply missed. He is preceded in death by his parents, John and Dorothy; brothers, John, Richard, Jerry, Clarence and Don; sisters, Elma Snyder, Clara Mylander, Betty Jones; daughter, Tammie Boizot; and Florene Murphy. Bill is survived by his loving children, Tina Sutton (Harold) of Eaton, CO, Terrie Murphy (Di Lockner) of Wellington, CO, Dixie Ryon (Sean) of Cleburne, TX and Billy Murphy (Amy) of Fort Worth, TX; Stefanie Murphy of Fort Worth, TX; 7 grandchildren; 10 great-grandchildren; brother, Russell Murphy of South Dakota; sisters, Dorothy Fuller of Wellington, CO, Esther Kelley of Morristown, TN, Rose Smithey of Rangely, CO and Judy Sutton of La Plata, MD; a host of nieces, nephews and other beloved friends and relatives. A celebration of life will be held at the Ellis Ranch Event Center, 2331 Ellis Ranch Ln., Loveland, CO 80537 on February 8th at 1:00pm.

William (Bill) Franklin Murphy went to be with his Heavenly Father on November 25, 2019, following a brief illness. He was born on November 7, 1933 in Thurman, CO to John and Dorothy Murphy. Bill was blessed to be raised with 15 brothers and... View Obituary & Service Information

The family of William F. Murphy created this Life Tributes page to make it easy to share your memories.

William (Bill) Franklin Murphy went to be with his Heavenly Father...

Send flowers to the Murphy family.