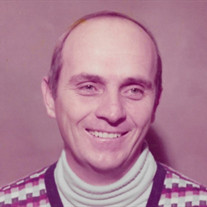 William Joseph Franek, 84, passed away on December 11, 2021. He was born in Colville, Washington, on May 25, 1937, the son of the late John Andrew, Sr. and Pauline Mary Franek. He served in the United States Air Force from 1960-1964, then attended University of Colorado at Boulder, earning a degree in Electrical Engineering. He worked for Public Service Communityof Colorado (now Xcel Energy) for 30 years, until his retirement in 1999. William enjoyed elk hunting and spending time outside, particularly in his garden. He always enjoyed talking over coffee with the locals at Johnson's Corner, and was a regular there. He was an avid football fan, alwyas rooting for his Denver Broncos, for better or worse. William was a strong believer in the importance of education and encouraged all of his children to excel in school. He always enjoyed meeting new people, and it's likely everyone has a story about "the time they met Bill." Whenever anyone asked how he was, his response was always "sweet, wonderful, charming, humble and modest. And those are my bad qualities." He is survived by his wife of 57 years, Jeanette B. Franek; a daughter, Amy B. Cope and her husband Scott; a son, Aaron D. Franek and his wife Cheri; a daughter, Lisa D. Franek; a son Casey A. Franek; five grandchildren; and four great-grandchildren. He was predeceased by his parents; and his siblings, John Franek, Jr., Margaret Martinez, Thomas Franek, Andrew Franek and Anthony Franek; and his granddaughter, Rosalyne Cope. William's funeral service will be held on December 29 at 1 p.m. at Grace Community Church in Johnstown. A reception will be held immediately after. In lieu of flowers, memorial contributions can be made in William's name to the Rosalyne M. Cope Memorial Scholarship Fund at High Country Bank, 516 U.S. Highway 24 North, PO Box 1882, Buena Vista, CO 81211.

The family of William Joseph Franek created this Life Tributes page to make it easy to share your memories.

Send flowers to the Franek family.