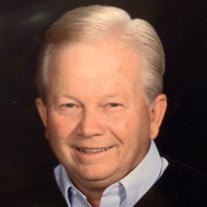 Wayne E. Lyon, husband, father, grandfather, 76 of Ft. Collins died November 17, 2019 at Centre Avenue Health and Rehab. Wayne was born October 3, 1943 in Holdrege, Nebraska to Milburn Lyon and Leona Carlson Lyon. After graduation from Holdrege High School, he attended Milford Technical College, and had a long successful career in telecommunications, working for Mountain Bell, and U S West. Wayne married his high school sweetheart Janet J. Malm on May 2, 1964. They made their home in Ft. Collins, Colorado. They were married 47 years before her death in 2011. Wayne enjoyed traveling, hunting, fishing, the outdoors, and especially loved spending time with his grandchildren!! Survivors include his children Stephanie Tomasini and her husband Ron, son Scott and his partner Joni; five grandchildren, Joshua, Emily, and Nicholas Tomasini, Jake Lyon, and Sheridan Powell and her husband Jordan. Brothers Ron Lyon and his wife Nita, and Leon Lyon and his wife Becky. The family would like to express their deep and sincere appreciation to Dr. Rebecca Jackson and especially the staff at Centre Avenue Health and Rehab for their kind and loving care of Wayne for the past four and a half years, as well as the staff at Pathways Hospice. A Memorial Service will be held 2 p.m., Tuesday, November 26, 2019 at First United Methodist Church, 1005 Stover Street. Contributions may be made to Pathways Hospice in care of Bohlender Funeral Chapel, 121 W. Olive, Ft. Collins, CO 80524.

The family of Wayne E. Lyon created this Life Tributes page to make it easy to share your memories.

Send flowers to the Lyon family.