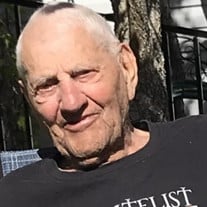 WALTER ALFORD KUEMMERLIN, age 98, passed away peacefully in the presence of family on March 4, 2022 at his daughter’s home in Coeur d’Alene, Idaho. Walter was born in Fort Collins, Colorado on May 28, 1923. He was the sixth of ten children born to Adolph and Mollie Kuemmerlin. Walt lived his entire life in the Fort Collins area. He spent his childhood on his family farm in Waverly, and graduated from Fort Collins High School in 1942, where he excelled as a wrestler. After high school, he continued to help manage the family farm and eventually purchased a neighboring farm of his own. Walt’s life changed dramatically in 1952 when he went on a blind date with a Denver city girl named Rita Manzanares. Walt and Rita fell deeply in love and remained sweethearts for nearly 70 years! Walt and Rita were married in January 1953, and began their lives together at the farm in Waverly. Their small family grew when daughter Sandy was born in 1953. In a short time it expanded further with the birth of sons Walt Jr in 1956 and Ron in 1958. Between the work on the farm and riding herd on three rambunctious kids, Walt and Rita were kept very busy indeed! But they always maintained a good attitude; the health and happiness of Walt’s family—all five of them—was what mattered the most. He would say that hard work and stressful times were always present, but Rita and his children gave him the strength and determination to get through them. Walt’s family extended beyond his own children to his nieces and nephews as well. He invited them to the farm, put them to work, and treated them as if they were his own children. Some considered him their “favorite uncle”, and cherished lifelong memories of their time on the farm. Shortly after Walt and Rita retired from farming, grandchildren arrived. Walt loved his grandchildren and was a playful grandpa, always willing to run, romp, and play games with them. While he and Rita continued to work for many years—at Colorado State University, Great Western Sugar, Coors, and other agricultural jobs—they now had the freedom to enjoy other pursuits, and spending time with their grandchildren was their favorite activity. They took the grandkids often on walks, day trips to the park, and swimming; and on overnight trips camping, seeing National Parks, and visiting distant family. Walt’s sweet tooth was legendary—it was he who introduced each of his grandbabies to ice cream, much to the disapproval of the on‐looking parents! Walt was an excellent dancer; he and Rita attended square dancing events throughout Colorado and Wyoming. They travelled extensively for four years, visiting every state in the U.S., and much of Canada and Mexico. During these journeys, they touched base with family and friends, witnessed new sights, and gained new experiences. And danced! Those travel years further enriched their lives and their love for each other. Walt was a good handyman as well. In addition to all the “fix it” tasks that a farm requires, he built three houses during his lifetime. He was generous with his time and expertise. On his frequent visits to his “out of state” daughter and her family, he always took care of needed home repairs and additions, to the eternal gratitude of his son‐in‐law. He was more than a father‐in‐law; he was a best friend. Walt loved to play games. He was a master chess player, and volunteered his time to teach the game to children. He and Rita played cards often with each other and with friends. He was an excellent horseshoe player and was skilled at billiards. He would play any game at any time with anybody, but enjoyed most playing with children and his family. It was easy to enjoy games with Walt because he was fun and always a good sport. It was fitting that he won the last game he played just two days before his passing. Walt lived a long life full of adventure, fun, love, and caring. He touched the lives of so many people. We will miss him greatly, but are comforted to know that he is now reunited with family and especially with his loving wife, Rita. Walter Alford Kuemmerlin was preceded in death by his parents, Adolph and Mollie Kuemmerlin; his loving wife Rita Kuemmerlin; sons Walter Kuemmerlin, Jr. and Ronald Kuemmerlin; six brothers; and three sisters. He is survived by daughter Sandra (Thomas) Ball; grandsons Matthew Ball, Colby (Priscilla) Kuemmerlin, and Ryan (Natalie) Kuemmerlin; granddaughters Melanie (Jesse) McLean, Angie (Darin) Pesola, and Tanya (Chris) Luce; and great grandchildren Jaden and Lucas Pesola, Xavier Kuemmerlin, Atreyu and Salix Luce, and Julian Kuemmerlin. Walter will be buried alongside Rita at Grandview Cemetery, Fort Collins, Colorado in a small service for immediate family. Donations in Walter’s memory can be made to Hospice of North Idaho (hospiceofnorthidaho.org/donate/) or to your local hospice organizations.

The family of Walter A. Kuemmerlin, Sr. created this Life Tributes page to make it easy to share your memories.

WALTER ALFORD KUEMMERLIN, age 98, passed away peacefully in the...

Send flowers to the Kuemmerlin family.