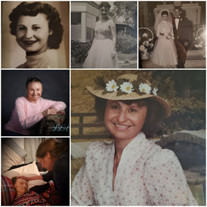 Virginia (Ginny) Lorraine Schafer was born on May 15, 1934 to Frederick Schafer and Katherine (Prestor)Schafer in Scottsbluff, Nebraska. The Schafer family moved to what was the German Russian Colony that is now Andersonville in North-East, Fort Collins Colorado. She was the second child of eight, having five brothers and two much younger sisters. As the colony evolved the family moved to a home on North Meldrum street, which is now in old-town Fort Collins. Growing up during the depression was a hard time, and she had many stories about the time. She worked in the theatres as a teen at the Lyric, American and Fox Theatres until after marrying and having her first child. Married to William Setzer, they raised three children and Virginias’ younger sister Barbara lived with them as mother, Katherine died shortly after their first child was born. Through married life she was a stay at home mom and watched children at home, Saint Josephs’ church and the local bowling allies. Later divorced Virginia went on to new adventures, continued to do childcare, cleaning and later in life doing food demos in many local stores and she was an active member of the Salvation Army. She died peacefully at her daughters’ home with family around her. Virginia is survived by her three children, Randy (Tracey) Rebecca (Jerry) and Therese. Brothers Donald, Frank, and her sister Kathy. Grandchildren (Randy) Brian, Megan, Durc and Drew. (Rebecca)Jerome, April, Laurie, and Charity and nine great-grandchildren. She was proceeded in Death by her parents, daughter Teresa Ann, brothers, Robert, Jerry, Jessie, and sister Barbara. Private family services will be held at a later date.

Virginia (Ginny) Lorraine Schafer was born on May 15, 1934 to Frederick Schafer and Katherine (Prestor)Schafer in Scottsbluff, Nebraska. The Schafer family moved to what was the German Russian Colony that is now Andersonville in North-East,... View Obituary & Service Information

The family of Virginia Lorraine Schafer created this Life Tributes page to make it easy to share your memories.

Send flowers to the Schafer family.