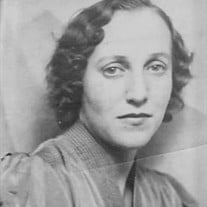 Vera Nadine Matthews-Oppie passed away, November 20th, 2019 at 5:00pm at the age of 103 years old. She is survived by, 1 daughter, 8 grandsons and numerous great grandchildren and great-great grandchildren. Vera, was born September 24th, 1916, the 2nd born child of 6, to Colonel Edward Mathews and Pansey Mathews on a home stead, in Flemming, Colorado. Where she attended school and helped her parents on the homestead, until moving to Fort Collins, with her parents at the age of 17. From an unsuccessful marriage, Vera was blessed with two loving daughters, Joyce Dorine and Myrna Nadine and later met the love of her life, Cecil Leroy Oppie, at a dance at the ‘Bellvue Grange Hall’, shortly after he had returned from the Second World War. They married November 26th, 1949, and returned to farming, in the front range of Larimer Colorado. Vera was mother and grandmother in heart and in action, to many in her family, welcoming so many into her home. She was a kind and graceful woman with a giving heart. She is dearly missed by all those, who knew and loved her. Preceding Vera in death are her parents; husband, Cecil; a daughter Joyce Bathauer, and a grandson Aaron Allbrandt. Viewing will be held 9 a.m. - 4 p.m., Monday, November 25, 2019 at Bohlender Funeral Chapel. The funeral service will be held, 10 a.m., Monday, December 2, 2019 at Bohlender Funeral Chapel. Interment will follow at Resthaven Memory Gardens Cemetery. A Celebration of life for Vera will be held Saturday December 15th at 1:00 PM at The American Legion Post 4, 2124 CO RD 54 G Fort Collins , Colorado 80524

The family of Vera Nadine Oppie created this Life Tributes page to make it easy to share your memories.

Send flowers to the Oppie family.