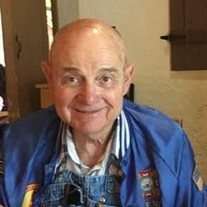 SMsgt. Thomas Glen Bender passed on Tuesday, April 12, 2022, at roughly 12:15 p.m. My father was born in Los Angeles, California on October 05, 1938. He and his family moved to Limon, Colorado when he was 5 years old. It was there that he met the love of his life, Mary Dell Kjosness. My mom and dad were married on November 17, 1957. Dad was accepted to the Air Force Academy, but he decided that he wanted to be married instead of being an officer. They had four children together, Elizabeth and Thomas, born in Arizona, Theresa, in Tennessee, and Katherine, in Virginia. Dad always mentioned that we were a coast to coast family. From the time I can remember, we moved every two to three years. After Katherine was born, we went to Rhein Mein, Germany for three years, Ellsworth A.F.B. for two years, Topeka, Kansas for two weeks, Norton A.F.B. for two years, and Waterloo, Iowa for two years. During our upbringing, dad spent twenty-three months in Vietnam, some of that time was spent in Cambodia. Dad retired from the United States Air Force in 1977. Dad was elected Larimer County Commissioner for District 2 in 2000. Among all of his other accomplishments during his life was that he became one of the first American Tree Farmers up in Rist Canyon, and was part of the Colorado Stewardship Program. He served as a Rist Canyon volunteer fireman, the Rist Canyon Fire Chief, served on the Farm Bureau, the American Tree Farmers Bureau (which he and mom were the Tree Farmers of the year for 1986 and 1996), the Knights of Columbus, the RERA Road Manager, and the Republican Party Rep. for Larimer County. My father would give anybody the shirt off his back, teach you about responsible forestry, and just sit down and talk with you about any issues that might be on your mind. My father was preceded in death by his parents William Glen Bender and his mother Alice Sonnenburg Bender, his wife of 53 years Mary Dell Kjosness Bender, his brother Robert Bender, and his daughter Theresa Lynn Bottger. He is survived by a brother Donald Bender, his daughters Elizabeth Hale and Katherine Myers, and his son Thomas D. Bender. He has seven grandsons, Casey and Mason Bender, Grant and Drew Hale, Codey and Chase Bottger, and Kyle Myers. He has three granddaughters, Mary Porter, Kristin Myers, and Celena Bottger. He also has two great-grandsons Alex and Tyson Bender, and a great-grand daughter Olivia Hale.

SMsgt. Thomas Glen Bender passed on Tuesday, April 12, 2022, at roughly 12:15 p.m. My father was born in Los Angeles, California on October 05, 1938. He and his family moved to Limon, Colorado when he was 5 years old. It was there that he met... View Obituary & Service Information

The family of Thomas G. Bender created this Life Tributes page to make it easy to share your memories.

Send flowers to the Bender family.