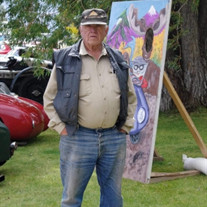 Theodore Charles Fliniau, was a proud son of a Jackson County Colorado pioneer family. Always keeping the shameful truth a secret, that he didn’t actually qualify as a true North Park “blue blood” because his parents Theodore Roosevelt Fliniau and Dorothy Hilda Bergquist Fliniau routinely fled the harsh North Park winter, and “horrors” he was born in Seattle, Washington on April 7, 1939. He grew up as a free thinker on the family ranch, graduated Jackson County High School and married Sandra Lepponen in 1957. Walden, Colorado has always been home, the nest where he and Sandy nurtured two children, Kyle Richard Fliniau, accountant, lawyer, deputy DA and Holly Louise Fliniau, chemical engineer, nationally recognized gardener of controlled chaos, lover of fine art and artists. Charlie’s home was a certified Urban Wildlife Sanctuary, hosting birders from all parts of the world. Although ranching was the blood line, heavy equipment was his happy spot. Charlie was employed by Nebraska Bridge, Ozark Mahoning, Kerr Coal, Energy Fuels and as North Park School district activity bus driver. He was employed after retirement as sideman for North Park Electric and formed a one man “AA” car rescue service for women who were deficient ditch drivers or drift busters. He eventually came to rest as hired man for Flowers by Sandy. Although his jobs were demanding, he always found time for community service. He dedicated 30 years to the North Park Hospital district as ambulance driver, EMT and president of the board. He was a member of the Jackson County planning commission, Walden action plan committee. For the past twenty years his most important civic volunteer mission was people management on Walden’s Main street and beyond. In regards to that, several friends commented to him “Well Charlie, who’s gonna give me hell when you’re gone?” Always at the side of his ever nagging wife he helped establish Hanson Park, installing the electrical power, irrigation system, trees, mowing and spinning tales to the nightly park campers. During his last few weeks Charlie’s home was host to a perpetual pop up wake, with the honoree participating in animated conversation and recollection. This soon became routine. It’s weird in a very special way. Not many folks are privileged to hear the words and feel the warmth of caring, loving friends, what a shame. The much appreciated outpouring, is a tribute to a life well lived. Good Time Charlie moved on to his next itinerary on May 20, 2020. Memorial donations may be made to: The Wild Animal Sanctuary, 1946 County Road 53, Keenesburg, CO 80643 or at www.wildanimalsanctuary.org

The family of Theodore Charles Fliniau created this Life Tributes page to make it easy to share your memories.

Theodore Charles Fliniau, was a proud son of a Jackson County...

Send flowers to the Fliniau family.