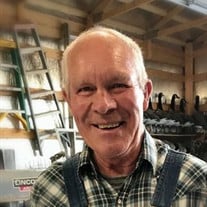 Theodore “Ted” Ray Marion, loving husband, dad, grandpa, and great-grandpa, passed away unexpectedly from a stroke. He passed peacefully with his beloved wife and children by his side on Sunday, February 14, 2021, at the age of 78. Ted is survived by his loving wife of 56 years Dixie Marion, daughter Tina Crewdson (Rick), son Tim Marion (Tammy); 5 Grandchildren, and 12 Great Grandchildren. Ted is also survived by brother Vern Marion and sisters Marge and Dee. Ted was preceded in death by his parents, Ivan and Grace Marion, brother Skeet Marion, and sister Judy. Ted was born September 7, 1942 to Ivan and Grace Marion in Fort Collins, Colorado. He met the love of his life in 2nd grade. They grew up together and eventually the lovebirds got married on June 25th, 1964. They began their family a year later when their daughter, Tina, was born. Three years later they welcomed their son, Tim. Ted and Dixie worked side by side in their road maintenance and dirt hauling business most of their lives. In recent years they became snowbirds and would spend winters in Arizona as well as enjoying many road trips across the country in their motorhome. Ted was passionate about life and family. He was always busy from sun-up to sun down and if he started a conversation with you…you’d be sure to have a better day! He enjoyed spending time with family. His kids, grandchildren, and great-grandchildren were a joy and a blessing to him. Ted’s grandkids all knew grandpa always kept candy in a kitchen drawer and have lots of fun memories of camping trips in a repurposed school bus! Ted was the kindest, most humble, hardworking, and sweetest man. He left a permanent mark etched on our hearts and will be greatly missed. No service is planned but a celebration of life will be held at a later date. “And he will wipe away every tear from their eyes; and there will no longer be any death; there will longer be any mourning, or crying, or pain; the former things have past away.” -Revelation 21:4 “Grandpas bring a little wisdom, happiness, warmth, and love to every life they touch.” -Unknown

Theodore &#8220;Ted&#8221; Ray Marion, loving husband, dad, grandpa, and great-grandpa, passed away unexpectedly from a stroke. He passed peacefully with his beloved wife and children by his side on Sunday, February 14, 2021, at the age of 78. Ted... View Obituary & Service Information

The family of Ted Theodore Ray Marion created this Life Tributes page to make it easy to share your memories.

Send flowers to the Marion family.