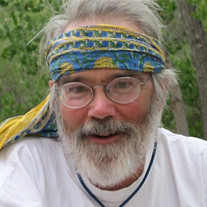 Stephen L. Rummler passed away on Saturday, May 16, at home with his wife, Sandy and his son, Mike by his side. Steve had struggled with Parkinson’s disease for many years. He was the son of the late Robert S. Rummler and Margaret (Betty) Leach Rummler. Steve was born in Milwaukee, Wisconsin, and later moved to Lake Mills, Wisconsin, where he graduated from high school. He went on to attend the University of Wisconsin in Madison where he majored in art. His many beautiful paintings and drawings reside with family members. He was drafted during the Vietnam War and reported to Fort Leonard Wood where he refused to serve. After many months spent in the military stockade, he was granted a conscientious objector honorable discharge. Steve then moved to Steamboat Springs where he met his wife, Sandra (Sandy) Kremmer who was also from Wisconsin. They had two sons Michael and Robert. He was a building contractor and designer and built a couple of homes in Steamboat Springs. He later formed an oil exploration company and established a number of producing wells in Moffat County. Steve spent as much time as he could outdoors and loved sailing, kayaking, river rafting, skiing, hiking and camping with family and friends. He leaves behind his wife, Sandy, his son, Mike, his brother Bill (William) and his wife Judy, his brother Charlie (Charles) and his sister Betsy (Lizzie, Elizabeth) and her husband, Roger Nottestad. His son, Robert (Rob), preceded him in death. There will be a Celebration of Life sometime in the future when we can all be together again. If desired, donations in Steve’s memory would be appreciated to the Parkinson’s Foundation or the Steve Rummler Hope Network. Visit bohlenderfuneralchapel.com to send online condolences.

Stephen L. Rummler passed away on Saturday, May 16, at home with his wife, Sandy and his son, Mike by his side. Steve had struggled with Parkinson&#8217;s disease for many years. He was the son of the late Robert S. Rummler and Margaret (Betty)... View Obituary & Service Information

The family of Stephen L. Rummler created this Life Tributes page to make it easy to share your memories.

Stephen L. Rummler passed away on Saturday, May 16, at home with...

Send flowers to the Rummler family.