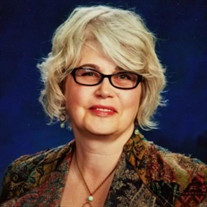 Sheila M. Doll passed away on May 8, 2020 in Loveland, CO after a 6-month battle with cancer. She was born on September 15, 1959 in Bismarck, ND to Richard and Irene (Bullinger) Doll. The family lived in many different cities in North Dakota and South Dakota while she grew up. She graduated from Valley High School in Hoople, ND in 1977. After graduating from High School, she worked for The Walsh County Record newspaper in Grafton, ND as well as Parkway Ford in Dickinson, ND. She moved to Minot, ND and attended Minot State College where she graduated with a bachelor’s degree in journalism. In June 1985 she joined the North Dakota National Guard traveling to many states helping and covering disasters (Hurricane Andrew was one). She retired in October 1995 with the rank of Sergeant. She lived in Minneapolis, MN, St Augustine and Tallahassee, FL. A move to Atlanta, GA was next where she decided to further her higher education by attending Georgia Tech University, graduating with a master’s degree in city planning with an emphasis on historical preservation. In 1995 she moved to Colorado, first living in Littleton before settling in Aurora. She worked for the city and county of Denver and Aurora as a city planner along with other part time jobs that kept her busy and meeting many people who would become close friends. In 2014 she went to work for FEMA helping people with disasters and again traveling to many of the states. Sheila found her niche here and loved the job, stating it is “the Best Job”. Sheila was a very proud and strong woman! A much-loved sister and aunt and friend. She had a love of clothes and shoes referring to herself as a “clothes horse”. We referred her to a “fashionista”, and she would tell her sisters what to wear and how to wear it. She had a great love of sports, especially baseball. When she was home, she rarely missed a Colorado Rockies game. When you attended a game with her you were expected to watch the game and not visit with each other. One of her lifelong dreams was to visit every baseball stadium in the US and watch a game. She did get to see several stadiums. She is survived by two sisters: Yvonne (Kevin) McNeal and her son James Ova, Jamestown, ND. Nadine Jung and son Darren, Fort Collins, CO. A brother Jason Doll and his children Carrington, Maddox, Beckett and Lleyton, Marshall, MN. Blessed be her memory. She was preceded in death by her parents Richard and Irene Doll, paternal grandparents Adam and Othelia (Tillie) Doll, maternal grandparents John and Margaret Bullinger and brother-in-law David Jung. Sheila’s ashes will be placed at the Veterans Cemetery in Mandan, ND at a later date. Please check back on this website for further information on this. In lieu of flowers we ask that you please donate to breast, ovarian or gastric cancer research or donate to your local baseball organization to help kids get a chance to play or families to attend games. She will be dearly missed.

Sheila M. Doll passed away on May 8, 2020 in Loveland, CO after a 6-month battle with cancer. She was born on September 15, 1959 in Bismarck, ND to Richard and Irene (Bullinger) Doll. The family lived in many different cities in North Dakota... View Obituary & Service Information

The family of Sheila Marie Doll created this Life Tributes page to make it easy to share your memories.