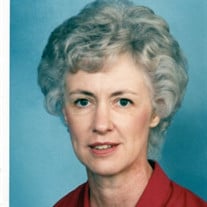 Kay Hartley, 81, of Loveland passed away at home July 13, 2019. She was born in Danville, Illinois, June 22, 1938 the only child of Russell L. and Mary Ellen (Brown) Reese. Kay graduated from Abingdon High School in Illinois and earned a Bachelor’s degree in Education from the University of Illinois. Kay married David Hartley August 16, 1959 in Abingdon, Ill. They moved to Corvallis, OR in 1961 where David attended Graduate School at Oregon State University and where their children were born. They lived in Columbia, MO, 1964-74, where David was a faculty member at the University of Missouri and Kay raised their family, sang in the choir and was an active member of the First Christian Church. They moved to Colorado in 1974 where David was on the Colorado State University faculty. Kay sang with the Fort Collins Women’s Chorus and the Timnath Presbyterian Church Choir. From 1982 to 1997 they lived in San Diego County, CA where David was a horticulturist for the Paul Ecke Ranch and Kay was a librarian for the Carlsbad Public Library. Returning to Fort Collins in 1997 Kay became active in the life of the Heart of the Rockies Christian Church. She enjoyed singing, quilting, traveling and cooking for her family. Kay was a kind, gentle and compassionate soul, a terrific mother and loved by her grandchildren. She was preceded in death by her parents. She is survived by her husband of almost 60 years, David Hartley; son Clinton Hartley of Loveland; daughter Elaine McArthur of Timnath; granddaughters Alexa McArthur of Parker, CO, Cassandra McArthur of Timnath, Hannah Hartley and Michaela Hartley of Loveland; grandson, Nathaniel Hartley of Loveland; and great-granddaughter, Maisyn of Parker, CO. A memorial service will be held at Heart of the Rockies Christian Church, 6501 Brittany Street, Fort Collins, Colorado, 80525 on Friday, August 16, at 2:00 pm. Memorial contributions may be made to Heart of the Rockies Christian Church. Visit bohlenderfuneralchapel.com to send online condolences.

Kay Hartley, 81, of Loveland passed away at home July 13, 2019. She was born in Danville, Illinois, June 22, 1938 the only child of Russell L. and Mary Ellen (Brown) Reese. Kay graduated from Abingdon High School in Illinois and earned a Bachelor&#8217;s... View Obituary & Service Information

The family of Sharon Kay Hartley created this Life Tributes page to make it easy to share your memories.

Send flowers to the Hartley family.