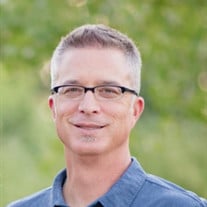 Shane Collin Siegfried, 48, of Fort Collins, CO, passed away at Medical Center of the Rockies on Oct. 19, 2020, following a tragic multi-car accident. Shane was born December 19, 1971, in Scottsbluff, NE, to John and Karen (Frost) Siegfried. He grew up in Bayard, NE, where he attended Bayard Public Schools, graduating in 1990. The world was a stage for Shane, and he freely shared his larger-than-life personality with everyone around him. While in high school, Shane participated in sports and music, including band, choir and the 21st Century Singers show choir. Following high school, Shane received a scholarship to the University of Wyoming to perform with the Centennial Singers. He also participated in the university’s student government. Shane earned a Bachelor of Science degree in business, minoring in marketing in 1994. In addition to making many lifelong friends at UW, Shane also met his soulmate and best friend, Shantel Gill. He proposed to her on stage during their last Centennial Singers show together in Bayard. Shane and Shantel married on July 22, 1995, celebrating 25 years of marriage this past summer. They brought three beautiful children into the world and he absolutely adored them. He was devoted to his family in every way. After college, Shane worked for Wells Fargo. His job took the family all over the state of Wyoming. They eventually settled in Fort Collins, CO, in 2001. In 2007, Shane found his calling and started his own business coaching firm. He absolutely loved what he did and swore he would never retire. He loved people and used his big heart and business experience to help many, from business owners to friends and family. In 2017, he and his business partner took over ownership of USA Liberty Arms in Fort Collins. Shane really enjoyed the business and was excited to be learning more about the industry and help the business grow. Shane didn’t know a stranger. He would light up a room by simply walking into it, and he could effortlessly make everyone laugh. He touched countless lives in his short time on earth. He spent many evenings and weekends coaching his children in all of their sports and activities. He also volunteered with their local neighborhood association. Shane loved the outdoors, especially hunting and fishing with his children. In keeping with Shane’s generous spirit, his final act of kindness was to give the gift of life so others may live on through organ donation. Shane leaves behind his loving wife, Shantel; daughters Regan and Dyllan; son Collin; his mother Karen Siegfried; a sister Kara (Shawn) Acino; a brother Eric (Diane) Siegfried; father- and mother-in-law Gari and Mona Gill; brothers-in-law Rick (Shelby), Randy (April), Nick (Missy) and Tyrell (Stephanie) Gill; sisters-in-law Adrienne (Joe) Haskins and Chaisley (Cody) Jacks; and several nieces and nephews who absolutely adored him. Shane was preceded in death by his father, John Siegfried. A Celebration of Life will be held at a later date. In lieu of flowers, donation can be made in Shane’s honor to The United Way of Larimer County Fire Recovery Fund or the Larimer County Food Bank.

The family of Shane Collin Siegfried created this Life Tributes page to make it easy to share your memories.

Send flowers to the Siegfried family.