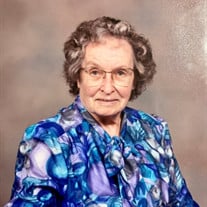 Sarah Caroyln Nelson, of LaPorte, Colorado, died October 17, 2021 in Ft. Collins, Colorado. She was preceded in death by her husband, Henry Lewis Nelson. Sarah was born in Sharpsburg, Iowa on December 30, 1919 and delivered by her older sister, Jesse, who often joked, “I never should have spanked her on the butt!” She was 101 years old, and as spunky as ever. Sarah was the youngest of 7 children that mostly lived into their late 90’s and 100’s, so longevity certainly ran in their family. She was baptized into the Seventh-day Adventist church in March of 1933 in a pond at Sharpsburg, Iowa. Sarah attended Oak Park Academy, class of 1937, in Nevada, Iowa; Union College in Lincoln, Nebraska in 1940; and Hinsdale Nursing School in Hinsdale, Illinois from 1941-1943. She also worked at Boulder Sanitarium in Boulder, Colorado. When Sarah was 25, she married Henry Nelson in Berrien Springs, Michigan. They were married 43 years before Henry passed away. After they were married, they lived in Glenwood and Clear Lake, Wisconsin for about 10 years where Henry was a dairy farmer and Sarah worked nights as a nurse in Amery, Wisconsin, then would feed the thrashing crews during the day. When moving to Michigan in the mid-1950’s, Henry worked at Andrews University and Sarah worked at Buchanan Community Hospital, in Buchanan, Michigan, as a Registered Nurse, until retiring and moving to Pierce, then Ft. Collins, Colorado. Sarah was a long-standing member of the Chikaming Church in Sawyer, Michigan, and later the Greeley and Ft. Collins Seventh-day Adventist churches. Sarah is survived by her 4 children, Burrell Ernest (Georgia) of Laramie, WY; Darrell Nathan (Sarah) of Ault, CO; Herbert Lewis (Sue) of Montrose, CO and Susan Cathryn (Thorban Sellers) of LaPorte, CO. Her 10 grandchildren are Scott, Erik, Steven, Tim, Michelle, Russell, Jamie, Jodi, Janet and Jessalene. Her 12 great-grandchildren are Brian, Rebekah, Denver, Annabelle, Hailey, Amelia, Isaac, Amarone, Eliza, Brielle, Rory, Liam and 1 great-great grandchild, Ezekiel. In December of 2019, family from Colorado, Wyoming and Michigan attended her 100th birthday party where some of her quilts were displayed. Sarah was an avid quilter, and all of her children and grandchildren have at least one of her quilts. She loved to tell jokes to get people’s reactions and mostly enjoyed laughing with her family around her, while playing Skip-Bo with the grandkids. There are many memories of camping with grandma and grandpa at Vedauwoo Recreation area outside Laramie, Wyoming. She loved to camp with her family and watch all the grandkids climbing the rocks. She also loved to travel, and they took the kids on camping vacations all over the United States, then later on, she enjoyed riding the semi with her sons, and her bag was always ready to go. Sarah had a memory like no other and it was sharp as a tack. If anyone wanted to know any family history, just go ask grandma! She could recite names and birthdays, and remember back to “so and so was born on this day, because it was the same day as . . .” She will be missed in a great way. Rest in peace, grandma, until we all meet again at our family reunion in Heaven. What a joy that will be! A graveside service will be held 3 pm, Thursday, November 4, 2021 at Resthaven Memory Gardens Cemetery.

Sarah Caroyln Nelson, of LaPorte, Colorado, died October 17, 2021 in Ft. Collins, Colorado. She was preceded in death by her husband, Henry Lewis Nelson. Sarah was born in Sharpsburg, Iowa on December 30, 1919 and delivered by her older sister,... View Obituary & Service Information

The family of Sarah Carolyn Nelson created this Life Tributes page to make it easy to share your memories.

Send flowers to the Nelson family.