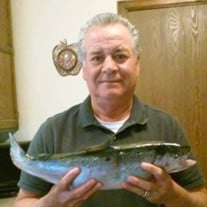 Ronald Daniel Vasquez, age 62, of Fort Collins, Colorado, passed away on Thursday, August 27, 2020 at Swedish Medical Center in Englewood, Colorado. Ron was born on August 30, 1957 in Elko, Nevada to Herman and Irene Vasquez. He was the second eldest of six children and the oldest of three boys. In his younger years, he was an accomplished athlete and enjoyed playing baseball, softball, and basketball. Ron worked professionally at Steele’s Market and Teledyne, which is where he met his wife Rose. Ron married Rose Vasquez on June 23, 1990 and raised two beautiful daughters together. He enjoyed spending time with his family, going camping and fishing, and being in the house of the Lord. Family was very important to Ron. He loved taking care of his daughters, Vanessa and Danielle, and teaching them how to play soccer. He was a great soccer coach and led his daughter’s teams to undefeated seasons countless times. He also enjoyed spending time with his family outdoors where he could teach his sons-in-law, Christen and Leo, all the good fishing holes and how to camp. Later in life, Ron enjoyed babysitting and playing with his two grandchildren, Hazel and Mateo, whom he took great joy in. For the past thirty-one years, Ron had devoted his life to the Lord and delighted in serving others. Whether he was doing yard work, cleaning the facilities, setting up for services, being the chauffeur on church outings, chaperoning at youth camps, or making tamales for fundraisers, Ron enjoyed doing all that he could to help others and show the light of Christ to those around him. Ron knew no stranger and saw the best in everybody he met. He was always willing to offer a helping hand whether he knew you or not, and put the needs of others above his own always. He truly had a heart after God, which was a trait that left a profound and lasting impact on all that he met. Ron is preceded in death by his father Herman Vasquez and leaves behind his wife Rose Vasquez, his mother Irene Vasquez, his daughters Vanessa Ceh and Danielle Vazquez, his sons-in-law Christen Ceh and Leo Vazquez, his grandchildren Hazel and Mateo Ceh, his siblings Debra Garcia, Herman Vasquez, Dorothy Sandoval, Donna Maestas, and Theodore Vasquez, his in-laws, brothers and sisters in-law, as well as a host of nieces, nephews, cousins, and friends. Ron will be remembered for his contagious laugh and smile, his love for the Lord, and his servant’s heart. A viewing will be held at Legacy Church, 600 9th Street on Tuesday, September 1, 2020 from 4:00 pm - 7:00 pm. The Graveside Service will be held at Grandview Cemetery on Wednesday September 2, 2020 at 9:30 am. A Funeral Service will follow at Bethel Family Praise Center, 19950 County Road 78, Eaton Colorado on Wednesday September 2, 2020 at 11:30 am. Contributions may be made to Bethel Family Praise Center, in care of Bohlender Funeral Chapel, 121 W. Olive, Ft. Collins, CO 80524.

Ronald Daniel Vasquez, age 62, of Fort Collins, Colorado, passed away on Thursday, August 27, 2020 at Swedish Medical Center in Englewood, Colorado. Ron was born on August 30, 1957 in Elko, Nevada to Herman and Irene Vasquez. He was the... View Obituary & Service Information

The family of Ronald D. Vasquez created this Life Tributes page to make it easy to share your memories.

Send flowers to the Vasquez family.