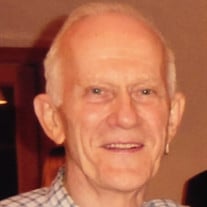 Robert “Bob” Charles Weissmann died peacefully at his home on May 4, 2021 in Fort Collins, CO. He was 91 years old. He was born in Mineola, N.Y. on December 25, 1929 to the late Wolfgang and Hannah Weissmann. Bob was a loving husband, father, grandfather, and great grandfather. He was preceded in death by his wife, Joy M. Weissmann, his grandson, Scott Weissmann, and his great granddaughter, Lucy Weissmann. Bob is survived by his children, Robert Weissmann, Jr. (Melinda), Richard Weissmann (Wanda), Jeff Weissmann (Colleen), Jim Weissmann (Tammy), Karen Rayburn (Jeff), Mark Weissmann (Carol), and Linnea Pennington (Jay); 24 grandchildren and 17 great grandchildren with 2 more expected soon. Bob is also survived by his sister, Mildred Kiggins. He received a B.S. degree in geology from Augustana College in Rock Island, Illinois and a M.S. degree in geology from Iowa State in Ames, Iowa. Bob retired from Shell Oil Co. after 33 years as a senior staff geologist and finished his career as a consultant with Erico, Masera, Datapages, and Lynx. While residing in Covington, LA, he was an active member of Holy Trinity Lutheran Church and Covington High School Booster Club. Bob was an avid baseball and Yankees fan, loved sharing time with family in the great outdoors, especially trout fishing in Colorado, and loved gardening and Beethoven like his father, Wolfgang. He was especially proud of his mother’s Swedish heritage and enjoyed a close relationship with his Swedish kinfolk, visiting them on several occasions and keeping in phone contact on a regular basis. His father, Wolfgang, was a native of Zurich, Switzerland and instilled Bob with a love of nature, especially the mountains. Bob was grateful to spend his last years in Colorado and share many wonderful family memories in the mountains he loved so much. “Viking by blood; Yankee by birth; Westerner by choice”. The family would like to thank Amy Sorgenfri for her care of their father. A memorial service will be held at a future date.

The family of Robert Charles Weissmann, Sr. created this Life Tributes page to make it easy to share your memories.

Robert “Bob” Charles Weissmann died peacefully at his home on...

Send flowers to the Weissmann family.