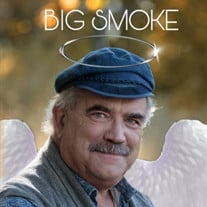 Robert Michael Slayton, 68 , went home to be with the Lord on November 3, 2021. Mike was born on August 30, 1953 to Robert Evans Slayton and Patricia Jean Meyers in Sacramento, California. Mike graduated from Sacramento Union Academy, with intentions to pursue a medical career at Pacific Union College, until he met the love of his life, whom he shared forty-six wonderful years and raised three daughters with. Mike was a fourth generation high end contractor and carpenter. He was a natural storyteller, bringing laughter wherever he went. Mike was a wise and respected man, sharing his knowledge of survival skills and history with anyone who would listen. Mike loved his students, and they loved him too, coming to visit Mike decades later and introduce them to their kids. He also had an immense love for animals and nature. His favorite places to travel include Granite Chief Picayune Valley, the Nevada desert, and wilderness areas in Wyoming. He collected many native-american and historical artifacts during his travels. He gave twenty years of his life at Ft. Bridger, keeping the fire alive with his flint and steel and bow drill demonstrations, earning his mountain man title of “Big Smoke,” along with his wife, “Flint Woman.” Mike’s children and grandchildren were introduced to Indiana Jones, Scrooge, Dances with Wolves, and Blazing Saddles at an early age, as these were a few of his favorite films. Mike is survived by his wife Loritta, his daughters, Laura, Katie and Rachel, a son-in law, a grandson-in-law and nine grandchildren. A Celebration of Life is planned for 1:30pm on Sunday, November 7, 2021 at Viestenz-Smith Mountain Park, 1211 Big Thompson Rd, Loveland, CO 80537. Bring a blanket or a camp chair and memories to share.

Robert Michael Slayton, 68 , went home to be with the Lord on November 3, 2021. Mike was born on August 30, 1953 to Robert Evans Slayton and Patricia Jean Meyers in Sacramento, California. Mike graduated from Sacramento Union Academy, with intentions... View Obituary & Service Information

The family of Robert Michael Slayton created this Life Tributes page to make it easy to share your memories.

Robert Michael Slayton, 68 , went home to be with the Lord on...

Send flowers to the Slayton family.