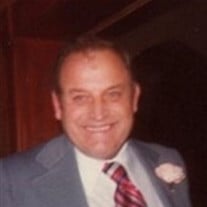 Robert (Bob) Eugene Markworth passed away December 20, 2020 at a skilled nursing facility in Fort Collins, Colorado. Bob was born September 11, 1928 in Grand Island, Nebraska to Lawrence 0. Danner and Elsie Albers. Robert along with siblings, Kenneth, Joy and Janet were adopted by Henry Markworth on October 28, 1941. He was the oldest of ten children including step siblings, Betty, Joanne, Carol, Melvin, Laura and James. From the time of his adoption Bob helped his father and mother run the family farm near Chapman, Nebraska. Robert was inducted in the United States Armed Forces on August 15, 1951and served during the Korean War and was awarded the Korean Service Medal and the United Nations Service Medal. On December 9, 1951 in Manhattan, Kansas he married Charlotte Marie Sullivan. Together they raised five children, Robert Junior, Mary, Joseph, James and Charles. After military service Robert operated a farm near Chapman, Nebraska. He subsequently moved his family to Colorado Springs, Colorado and worked for Coca Cola for most of his adult life. He later operated a business as an Achway Cookie Distributor. He is survived by wife, Charlotte Markworth; children, Mary Benson, Joseph Markworth, James Markworth and Char1es Markworth; sisters, Joanne Lynch and Carol Hatcher. He was preceded in death by his son, Robert S. Markworth and siblings, Kenneth Markworth, Joy Danner, Jeanette Herald, Laura Markworth, Betty Marquis, Melvin Markworth and James Markworth. He will be remembered his for strength, kind nature and infectious laugh. We love and will miss you, rest in peace. A Military Memorial Service will be held at Fort Logan National Cemetery in Denver, Colorado at a later date.

The family of Robert E. Markworth created this Life Tributes page to make it easy to share your memories.

Send flowers to the Markworth family.