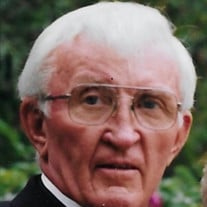 ROBERT ALLEN LONGENBAUGH (Our Bob), 84 of Fort Collins passed peacefully Saturday, October 17th with family by his side. Robert was preceded in death by his parents Harry and Frances Longenbaugh and his sister Harriet Cox. He is survived by his wife Eulalia (Lale), niece Diana, niece Stephanie, 5 stepchildren, he considered his own, and many grand and great grandchildren. Robert was born in Durango, CO on November 27, 1935. He was a descendant of original Colorado Pioneer families and grew up in Cortez. Robert graduated high school. In Cortez, CO and enrolled at Colorado A & M (CSU). He graduated from CSU in 1957 and was commission as an officer in the United States Air Force the same day. Robert was active duty in the Air Force as a meteorologist. He was stationed in Guam. Robert completed a Master of Science degree from CSU specializing in soil and water management. He was tenured assistant professor in Civil Engineering. As a faculty member Robert received awards and recognition related to his research on water issues and irrigation, working a great deal with farmers and politicians across the state and nation. In 1975 he was promoted to Associate Professor. In 1981 he retired from CSU to become the Assistant State Water Engineer for the State of Colorado. Even after retiring from that position, he remained active as a consultant and in educating people about the issues related to groundwater and the importance it has in agricultural life in Colorado. Robert and Eulalia have created an endowed scholarship at CSU to support the studies of students interested in water resources and quality issues. Robert greatly enjoyed hunting, fishing and visiting with friends and family growing up and well into his adult years. In 1982, he married the love of his life Eulalia (Lale) Muhlbradt. They enjoyed dancing, camping, and traveling the United States and Europe. They were avid CSU Rams and Bronco Fans traveling to and attending Bronco Super Bowls. Summertime fun included gardening and Rockies games, but family functions were always a priority. Robert lived a full life. He was a greatly beloved husband, brother, uncle, grandpa, mentor, friend and neighbor. He will be dearly missed, but never forgotten. “Thank you for touching so many lives.” We love you. . Rest in Peace. A Visitation will be held at Bohlender Funeral Chapel, Thursday, October 22, 2020, 5-7 pm. The Rosary will begin at 7 p.m., immediately following the Visitation. A private funeral mass will be held at St. Elizabeth Ann Seton with an interment with military honors at Roselawn Cemetery.

ROBERT ALLEN LONGENBAUGH (Our Bob), 84 of Fort Collins passed peacefully Saturday, October 17th with family by his side. Robert was preceded in death by his parents Harry and Frances Longenbaugh and his sister Harriet Cox. He is survived by... View Obituary & Service Information

The family of Robert A. Longenbaugh created this Life Tributes page to make it easy to share your memories.

Send flowers to the Longenbaugh family.