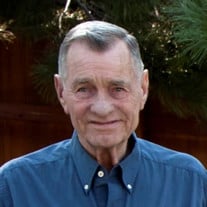 Robert “Bob” Hixson passed away on July 5, 2021. Bob was born at home in Holly, Colorado on January 16, 1933, to Bryan Crawford Hixson and Ola Genevieve Hixson (Mekeal.) He grew up and around Holly, graduated from Holly High School in May of 1951. Bob attended University of Colorado in Boulder, where he studied for an electrical engineering degree, but was drafted before obtaining his degree. While attending CU, he met the love of his life, Lillian Ann Newbury. They married July 21, 1953. In 1953, Bob was drafted into the Army during the Korean war and was stationed in Germany. Bob headed out to his assigned duty first and Ann sailed by ship and joined him later. Their first child, Robert B Hixson Jr, was born there. After two years of military service, Bob was discharged and he and Ann moved back to Boulder, where they added three more children; Cathy Jo, Steven Craig, and Kelly Lynn. Upon Bob’s return from duty, he went to work for Arnold Brothers Motor Company in Boulder. under Bill Arnold’s tutelage and encouragement, Bob and the family moved to Fort Collins in 1963. Bill invested the startup money for a sports car dealership in Fort Collins and Bob managed The Continental Sports Car Center. Bob later branched out on his own and managed a Sinclair gas station on S Collage Ave. He then went into business with Ron Johnson, using his electrical engineering education operating Pioneer Electronics, which he ended up buying out Ron and renaming the business to Electronic Services. He later sold the business and went to work for Platte River Power Authority, where he retired in 1997. Bob was an active club member with the Optimist Club, International Facilities Management Association, Jay Cees, Republican National Convention, Discovery Motor Homes and The Drift Skippers Snowmobile Clubs, and was the Scoutmaster for Pack 92 in Wellington. Bob is survived by his children, Bob Jr., Cathy Heiney (Joe), Steve (Beth), all of Fort Collins and Kelly Hixson of Wellington. He had 4 grandchildren, Stephanie and Jennifer Heiney and Bradley (Allison) Hixson of Fort Collins and Rod (Sarah) Hixson of Wellington. He is also survived by 9 great grandchildren, his sister-is-law Christine Hixson and many nieces and nephews and many friends. He is preceded in death by his wife, Ann of 62 years, his parents, his sister Donna and her husband Bob Hamilton and his brother, Jim Hixson. There will be a celebration of life at Steve and Beth Hixson’s at 209 Bradley Drive, Fort Collins, CO from 1 to 4 pm on July 17TH. Come join us for BBQ and memories of Bob. Summer casual dress, please. IN LEIU OF FLOWERS PLEASE MAKE A DONATION TO HOSPICE IN CARE OF PATHWAYS OF NORTHERN COLORADO.

Robert &#8220;Bob&#8221; Hixson passed away on July 5, 2021. Bob was born at home in Holly, Colorado on January 16, 1933, to Bryan Crawford Hixson and Ola Genevieve Hixson (Mekeal.) He grew up and around Holly, graduated from Holly High School... View Obituary & Service Information

The family of Robert B. Hixson created this Life Tributes page to make it easy to share your memories.

Send flowers to the Hixson family.