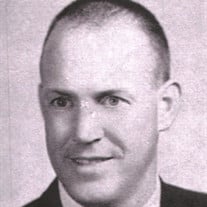 Robert M. Hazlett of Fort Collins passed away at his home on September 11 after a lengthy illness. He was 91. Robert, or “Coach” as he was known to thousands of New Mexico State University students moved to Fort Collins with his wife Kathryn in 1993 after his retirement from 28 years of service as an educator at NMSU. Robert was born August 11, 1928 in Wheeling West Virginia, where he excelled in many sports, winning state championships in swimming, diving and wrestling. In Wheeling, Bob learned tumbling and acrobatics at the YMCA while working at the Wheeling Steel Company. A chance meeting with Mr. George Nissen, founder of the Nissen Trampoline Company at an Indiana county fair led to his attending the University of Iowa as a student¬-athlete. Bob won many competitions at and for SUI, most notably winning the first SUI NCAA Men's Gymnastics National Championship gold medal in the trampoline event, and 2 Big Ten Conference gold medals in the tumbling event. Bob earned a Bachelor and Master's degree in Physical Education while at Iowa and was commissioned in the Army as an Infantry Second Lieutenant. He met his future wife, Kathryn Sedlacek, at the Iowa Student Union bowling alley. Bob and Kathy were married September 8, 1956. Bob and Kathy left Iowa for Socorro, New Mexico and the New Mexico Institute of Mining and Technology, where Bob served as intramural and Swimming Pool Director from 1957-1959. They then moved to Elmhurst, Illinois and York Community High School, where Bob taught physical education and health, and coached the boy's gymnastics team to 2nd, State Champions of Illinois, and 3rd finishes respectively in the Illinois State Championship in 1959-1962. Las Cruces and New Mexico State gave Bob the opportunity to educate physical educators. At NMSU, Bob coached men and women gymnastics teams, taught physical education, physiology, and human anatomy, served as a noted student advisor, advised the NMSU cheerleading squad, served as an advisor for Phi Epsilon Kappa, served as the circus club advisor, taught children's gymnastics classes for 17 years, and earned his doctorate at North Texas State University. He enjoyed being in the Sunrise Lions Club (charter member) and serving as a trustee and ruling elder of the First United Presbyterian Church. He was active in Camp Fire and Boy Scouts, and church youth activities. After coming to Fort Collins, Bob was active in fishing, gardening, Kiwanis, Westminster Presbyterian Church, and enjoying his family. In 2003, Bob was selected and inducted into the Iowa Varsity Lettermen's Club Hall of Fame for athletic achievement. He and Kathy celebrated their 63rd wedding anniversary on September 8. Bob is preceded in death by his parents, Maurice and Elgie Hazlett; his brother, Charles "Jack" Hazlett, and his sister, Ruth Ann Carnahan. He is survived by wife, Kathryn and son, Mark of the home; daughter, Kim Beierl (John); granddaughter, Bethany Folse (Dan); grandson, Brian Beierl, all of New Orleans, LA; daughter, Karen Martinez (Alex) of Wellington; granddaughters, Alex Marie Rios (Pedro) of Fort Collins; granddaughter, Marisol Martinez of Wellington, and 5 great grandchildren. A Memorial Service will be held at Timnath Presbyterian Church of Timnath at 11AM, Saturday, October 12, 2019 followed by a luncheon and program honoring Bob’s life. In lieu of flowers, the family request that memorials be made to the University of Iowa Stead Family Children's Hospital, Iowa City, or make a memorial by doing a kindness for a child or veteran in need.

Robert M. Hazlett of Fort Collins passed away at his home on September 11 after a lengthy illness. He was 91. Robert, or &#8220;Coach&#8221; as he was known to thousands of New Mexico State University students moved to Fort Collins with his... View Obituary & Service Information

The family of Robert M. Hazlett created this Life Tributes page to make it easy to share your memories.

Robert M. Hazlett of Fort Collins passed away at his home on...

Send flowers to the Hazlett family.