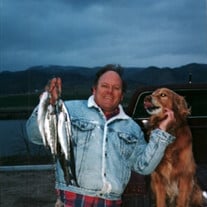 Heaven just gained an amazing and loving soul. Robert (Brother Bob) Bell, age 69, beloved husband and father went to be with the Lord and entered into eternal rest on September 27, 2019. Bob was born on December 31, 1949 to Wayne and Sylvia (Moosberg) Bell at Queen of Angels Hospital in Los Angeles, California. On February 17, 1973 Bob married the love of his life, Kathi (Russell). They welcomed their son, Brook in November 1974 who was their pride and joy. Bob was a very happy, fun loving person who had a passion for fishing and the Broncos. When Bob was just a little tyke, his parents would find him sitting outside the bathtub with a makeshift pole trying to catch a fish in the tub. Bob went on to play high school football where he was an outstanding varsity linebacker. He always laughed and said he wasn't the fastest on the team, but boy was he good! Bob was also an excellent skier and taught his son Brook how to maneuver those diamond ski runs. Bob helped coach one of Brook’s little league teams and was otherwise in the stands supporting his son, no matter the event, game or amount of travel needed. Bob loved taking Brook to the beach where he taught him how the ocean waves work along with riptide safety. He also taught Brook how to body surf, as this was one of Bob’s favorite pastimes and skills; having himself grown up in Southern California. Bob served in the United States Navy as an Aviation Jet Mechanic stationed at Cam Ranh Bay, Vietnam. While under a horrific mortar attack, that left his base in shambles, Bob told God that if he gets him out of this alive, he would serve the Lord the rest of his life. In 1976 he asked Jesus to be his Lord and Savior and has served Him ever since. He loved telling everyone “Jesus Loves You” and was never ashamed of his faith. Bob worked as a nightshift manager in the grocery business for many years. At different times, Bob would take a break from the grocery business and pursued a passion for commercial and residential painting, to the extent at even owning his own business. For some, painting is a chore, but for Bob it was a way for him to pursue and display perfectionism in his own creative and artistic way. There wasn’t a building safe from his critic on the quality of work done, whether inside or out. You would either hear “whoever did this, did a really good job” or quite the contrary with a detailed remark on how they messed up or were lazy. Bob and Kathi loved traveling to Hawaii and wanted to become snowbirds there. They especially loved visiting their son, Brook who lived in Hawaii for a period of time after he graduated college. Once Brook was back on the mainland, they enjoyed their trips to California for birthdays and holidays, spending as much time as they could with their family and friends. Bob and his big Jesus bear hugs are going to be missed so much. Such a loving, generous man who always wanted to brighten someone’s day. Bob, you can fish ‘till your hearts content and cheer on your Broncos! We love you and wish we could spend one more day with you! Bob was preceded in death by his father, Wayne, his mother, Sylvia, and his older brother, Steve. Bob is survived by his loving wife, Kathi, his loving son, Brook, and several very special nieces, nephews, cousins, brothers-in-law, sisters-in-law, great-nieces, great-nephews and friends. In lieu of flowers, please consider contributions to the American Cancer Society for research in care of Bohlender Funeral Chapel, 121 W. Olive, For Collins, CO 80524. John 3:16 For God so loved the world, that he gave his only begotten son, that whosoever believeth in him should not perish, but have everlasting life. Service for Bob will be held at: Timberline Church 2908 S Timberline Road Fort Collins, Colorado Wednesday, October 9, 2019 11:00 a.m. South Auditorium Interment: Fort Logan National Cemetery 3698 South Sheridan Blvd Denver, Colorado 80235 Staging Area “C” Thursday, October 10, 2019 1:15 p.m.

Heaven just gained an amazing and loving soul. Robert (Brother Bob) Bell, age 69, beloved husband and father went to be with the Lord and entered into eternal rest on September 27, 2019. Bob was born on December 31, 1949 to Wayne and Sylvia... View Obituary & Service Information

The family of Robert Gerald Bell created this Life Tributes page to make it easy to share your memories.

Send flowers to the Bell family.