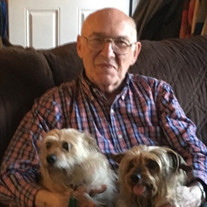 Richard (Dick) E. Weaver, 81, of Loveland, CO, passed away on October 14, 2020 after battling with Alzheimer’s Disease. Dick was vibrant in life and did not leave this world gently but fought the disease to the end. Dick was born to Donald and Lillian Weaver in 1938 in McCook, NE. He graduated from Grand Island High School in 1956, completed his undergraduate degree at Nebraska Wesleyan University in 1960 and entered the Army where he learned multiple languages in US Army Language School. Dick was a translator for the Army during his time in service. Upon completion of his military service, Dick used the GI Bill to attend Creighton University and graduated in 1968 with his law degree. Dick worked in private practice in Wahoo, Nebraska and Grand Island, Nebraska, where he also served as an Assistant District Attorney. He was then appointed as County Court Judge for Hall County. In 1982, Dick married Doris Silver and they spent 38 years building wonderful memories. After leaving Grand Island, Dick and Doris lived in Las Vegas, Nevada and Biloxi, Mississippi before settling in Loveland, Colorado. They enjoyed traveling together to the Caribbean and Europe. Dick was an avid reader and a Master Bridge player. He was actively involved throughout his life in theater, and church and community choirs. He was strong in his Christian faith. Dick is survived by his wife, Doris (Silver), daughter Amy and son Daniel, brother Allen (Laura), and nephews: Bryce, Colton and Luke. Dick was preceded in death by his parents and two older brothers. In lieu of flowers or memorials, the family suggests a donation to the Colorado Chapter of the Alzheimer’s Association (www.alz.org/co ). A memorial service will be held November 14, 2020, 11:00 a.m., at Mountain View Presbyterian Church in Loveland. The service will be closed to the public but will be livestreamed for viewing. A link for the livestream service will be available on the church website a few days prior to the service (www.mymvpc.com).

Richard (Dick) E. Weaver, 81, of Loveland, CO, passed away on October 14, 2020 after battling with Alzheimer&#8217;s Disease. Dick was vibrant in life and did not leave this world gently but fought the disease to the end. Dick was born... View Obituary & Service Information

The family of Richard Earl Weaver created this Life Tributes page to make it easy to share your memories.

Send flowers to the Weaver family.