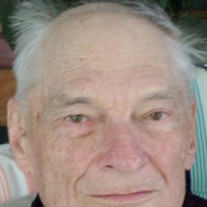 Richard Andrew Snyder, 96, of Fort Collins, CO, formerly of Littleton, died November 6, 2021. He was born October 21, 1925, in Newburgh, New York, to Edward F. Snyder and Lydia (Znamenacek) Snyder. Richard moved to Fort Collins with his mother and younger brother, Earl, when he was a toddler and graduated from Fort Collins High School. After World War II, Richard served in the U.S. army as an official photographer of the Japanese war crimes trials in Tokyo. He learned to golf while there, developing a lifelong passion for the sport. Richard also had a passion for science, engineering and technology and received an engineering degree from the University of Colorado. He worked for the Martin Marietta Corporation (Lockheed Martin) in Littleton for many years. Richard never married; his extended family was very important to him. Richard is survived by Earl’s children and their families: Jay Snyder, Nola McMillen, Rex Snyder, Ward Snyder and Amy Gregory, all of northern Colorado, as well as his siblings Mildred Saylors (Lake Worth, Florida), Katherine Graves (Lake Worth) and Edward Snyder, Jr. (Tallahassee, Florida), and their families. Also surviving are three special cousins—Rose Kremers, Cody Znamenacek and Donna Bellmore. He was preceded in death by his parents, his brothers Earl Snyder and Walter Snyder and his sister Gladys Rodberg. Richard was intelligent, amiable, independent and well loved. His family and friends are gathering at 11:00 a.m. on November 24 at his gravesite in Grandview Cemetery, Fort Collins, to share memories and reflect on his life.

The family of Richard Andrew Snyder created this Life Tributes page to make it easy to share your memories.

Send flowers to the Snyder family.