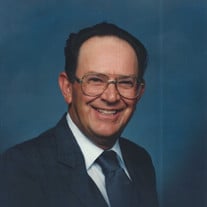 Richard (Dicky) L. French of Fort Collins, Colorado, passed away peacefully on March 5, 2022. Dick was born on March 31, 1936, to Darrell and Clara French in Bee Branch, Arkansas. He had fond memories of his youth growing up on the family dairy farm with his parents and brothers and surrounded by both sets of grandparents, aunts, uncles and cousins. He joined the Airforce after graduating high school in 1954 and was stationed in France. He met Jeannine Marshall in France and they were married on June 17, 1956. They had three daughters, Shirley and Kathlyne were born in France and Valorie was born in Fort Collins. Dick and Jeannine spent many happy years together and raising their family until her passing in 1995. Following his service in the military he settled in Fort Collins where he worked for AT&T as an electronic engineer until he retired 1999. Throughout those years he met and maintained many close friendships with his co-workers, whom he lunched with monthly throughout his retirement. Dick’s family grew when he met and married Sharon Turk of Fort Collins, Colorado on July 7, 2001, and welcomed her children and their families into his life. They happily pursued their many interests together until his death. Dick was a notorious story teller and jokester with a big and happy heart. He never met a stranger and loved sharing stories about growing up in Arkansas, his worldly travels while in Europe and with AT&T and his “treasures” found metal detecting. He had lots of hobbies which included history, racing, polka music, Volkswagens, dune buggies and some that led him into business ventures such as Tiger Steel and French’s Candy Store. Later, he bought a hotdog cart and sold burritos on steel deliveries mostly so that he could meet and make more friends. He was deeply loved and will be greatly missed by his family and friends. He was preceded in death by his wife Jeannine French and his parents Darrell and Clara French. He is survived by his present wife Sharon French, his daughters Shirley (Dave) Lindsay, Kathlyne “Tach” (Ron) Costello, and Valorie West, his step-children Laurie (John) Whitman, Kelly (Joe) Lee, and John (Laura) Turk, his grandchildren Cale, Ron, Samantha, Michaeline, and Lindi, his step-grandchildren Karl, Derek, Brennan, Gabriel, Gage, Clancey, Emery, Austin, Laurielle, Cate, Claire, Caroline, Davin, and Hunter and 19 great-grandchildren, his brothers Jerry (Kathy) French, Don (Corretta) French, and his nieces and nephews. Memorial services will be held at Bohlander Funeral Chapel in Fort Collins, Colorado on Friday, March 11, 2022 at 10:00 a.m. with a reception immediately following. A military burial will be held at Grandview Cemetery in Fort Collins, Colorado, following the reception. In lieu of flowers the family has requested donations be made in his name to the US Dept of Veteran Affairs. The service will also be live-streamed on the Bohlender Funeral Chapel website.

Richard (Dicky) L. French of Fort Collins, Colorado, passed away peacefully on March 5, 2022. Dick was born on March 31, 1936, to Darrell and Clara French in Bee Branch, Arkansas. He had fond memories of his youth growing up on the family dairy... View Obituary & Service Information

The family of Richard "Dicky" Lewis French created this Life Tributes page to make it easy to share your memories.

Send flowers to the French family.