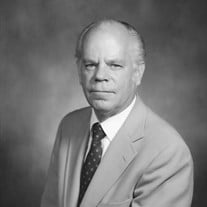 Richard Irvin Fisher (Dick) of Fort Collins, Colorado went to be with the Lord on March 6, 2020. Dick was born on June 11, 1931, the twin son of Esthereen and Irvin 0. Fisher in Topeka, Kansas. In 1949 Dick graduated from Topeka High school with a scholarship to Washburn University in Topeka, Kansas. After three years at Washburn he enrolled at Kansas State where he completed a bachelors degree in mathematics. Shortly after graduating he was drafted and assigned duty with the Combat Engineers. During his service he attained the position of sergeant and completed with honors in 1955. After his service he returned to Kansas to take a teaching position at Hamlin High School. As well as a teacher Dick continued on as a graduate student in the school of education at the University of Kansas where he earned a bachelor's degree in education. In 1957 Dick acquired a graduate assistantship in mathematics at the University of Kansas and received a master's degree in counseling and guidance in 1959. During his time at KU Dick met his wife of 60 years Jane Secrest who was also a graduate assistant. On December 26, 1959 he and Jane were married in Lawrence, Kansas. Over the next few years they became the proud parents of three children, Anne, David and John. In 1959 Dick joined the staff at Shawnee Mission high school in Overland Park, Kansas where he taught mathematics and was the counselor for sophomores. Continuing to further his education he completed his doctorate degree from the University of Kansas in 1969. His last year in Kansas he worked as a school psychologist in the Shawnee Mission school district. 1970 brought a dramatic change in his career when he accepted a position as an assistant professor of education at Colorado State University. Dick and Jane relocated their family of five to Fort Collins. By 1980 he was promoted to a full professorship in Educational Psychology. During his tenure from 1970 to 1993 he founded and edited three professional journals entitled "The Small Forum", "The Journal of Professional Studies" and "Rural Educator''. While he was teaching and writing he developed two television courses for in service training of teachers in the area of educational psychology and special education. Both courses achieved wide spread popularity and were influential to his field. Dick completed a text for special needs teachers entitled "Learning Difficulties". Dick was a member of Phi Delta Kappa and an honorary member of Sigma Xi. After his retirement in 1993 Dick's passion for learning and writing continued to be fueled by his faith when he wrote three books for Christians entitled "Pathways to Higher Ground", "Elements of the Christian Faith" and "Perplexing Verses from the New Testament". On the lighter side Dick also enjoyed writing poetry which he was proud to show to his family members. His time during retirement was filled with many hours of playing chess. Before his ill health Dick fellowshiped at Bridge Church, formerly known as Bethel Baptist Church. Sunday dinners were always a big part of his family where there was usually a game of Scrabble to be played. Dick was preceded in death by his father in 1941, his mother in 1993, twin brother Robert Fisher in 2013 and his daughter Anne in 2017. He is survived by his wife, Jane; his children, David Fisher (wife Eva); and John Fisher (wife Leslie); four grandchildren, Brianna Tooley, Brett Tooley (wife Naomi), Michelle Fisher and Devan Fisher, and two great grandchildren Ambrie and Myah Tooley. In lieu of flowers memorial contributions can be made to Christian Missions in Many Lands.Inc, P.O. Box 13, Spring Lake, New Jersey 07762 or Pathways Hospice Care Center, 2000 N. Boise Ave., Loveland, Colorado, 80538 .

Richard Irvin Fisher (Dick) of Fort Collins, Colorado went to be with the Lord on March 6, 2020. Dick was born on June 11, 1931, the twin son of Esthereen and Irvin 0. Fisher in Topeka, Kansas. In 1949 Dick graduated from Topeka High school... View Obituary & Service Information

The family of Richard Irvin Fisher created this Life Tributes page to make it easy to share your memories.

Send flowers to the Fisher family.