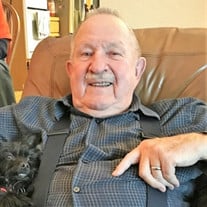 Richard David Loyd "Dick" 84, passed away on April 11, 2022. He was born on December 14, 1937 in Laramie Wyoming to William E. and Marie Loyd. Soon after, his family moved to Hanna Wyoming where he and his brothers and sister created lots of childhood stories and times on the family ranches. In 1952, the family moved to Bellvue and Fort Collins area. Dick played football and graduated from Cache La Poudre High School in 1957. He was an avid Broncos fan, through good times and bad. He enjoyed fishing, hunting, camping, playing cards, and a good cup of coffee. Dick married Dixie Lee Powell on December 14, 1963 after meeting her 6 months earlier at his sister Beverly and Bob Baxley's wedding. All four Loyd siblings married within those 6 months. Dick had many jobs through the years, including being a trade union painter and a maintenance painter for the City of Fort Collins. He never met a stranger that he could not draw up a conversation with. He always had a story to share about his many experiences and share his faith in the Lord. He had many friends from all stages of life including his community at church; he loved us all. He is survived by his wife Dixie, Daughter Julie and Dayton Norrgard, Son Jeff and Lauri. Grandchildren Robyn (& Alex Engelbert), Ginnie (& Rishi Oad), Cassie (& Luke Belsito), John Barton Loyd, Marissa Norrgard (& Charlie Volz). Great grandchildren Brady Engelbert, Henry Engelbert, Sonia Oad and baby Oad to be born in 2022. His brother-in-law Robert Baxley and sister-in-law Vickie Kerwood and many beloved nieces and nephews. He is preceded in death by his parents, brothers Clint and Bill, and sister Beverly. Celebration of his life will be Saturday April 16, 2022 at 1:00 pm. Please join us at Immanuel Christian Reformed Church at 1900 S. Taft Hill Road. In lieu of flowers, memorial contributions may be made in Dick’s name to Habitat for Humanity Fort Collins (fortcollinshabitat.org) for the faith build.

Richard David Loyd "Dick" 84, passed away on April 11, 2022. He was born on December 14, 1937 in Laramie Wyoming to William E. and Marie Loyd. Soon after, his family moved to Hanna Wyoming where he and his brothers and sister created lots... View Obituary & Service Information

The family of Richard "Dick" David Loyd created this Life Tributes page to make it easy to share your memories.

Send flowers to the Loyd family.