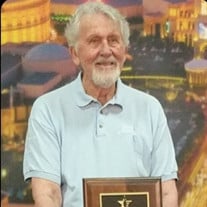 Richard “ED” Edward Deines,87, passed away at North Colorado Medical Center on Saturday, December 5th, 2020 due to complications from a car accident. He was born October 16th,1933 to George K and Mollie (Knaus) Deines in Ft Collins, Colorado On October 16th, 1933. Ed was a businessman / Entrepeneur owning and operating several successful businesses during his life time. He attended Colorado State University before serving in the navy in the early 1950’s in Korea. Upon returning he married Patricia (Hoff) Deines in 1957. He opened the Canada Dry bottling company in the early 60’s. Soon to become Royal Crown Cola / Canada dry Bottling with his Father George K and his brother Arthur. After selling the RC Cola company in 1986 he became fully involved in another business he had purchased in the late 70’s called Bowlerado Lanes bowling center (alley in those days) in Greeley. Upon closing Bowlerado he was the driving force in opening Highland Park lanes, a what is now a 32-lane bowling center, lounge, arcade, snack bar, and golf simulation room. Ed’s real-life passion was bowling and of course people. He always promoted bowling in its purest form in leagues and especially competitive (tournament) play. He earned many accolades over his life time. He was inducted into three halls of fame. The Colorado, Ft Collins, and Greeley Bowling associations. He was a national singles champion in 1991 with a series of 826 which included a perfect 300 game, it was the highest series total up to that date in the championship's history. He competed in 42 championship tournaments which the last few included competing with his grandchildren. He won multitudes of other events over his career and was also a Denver masters champion. Ed’s other real joy in life was people. Especially spending time out at his pool with his children, grandchildren, great grandchildren, employees, and their friends and families. His business success was based predominantly on the fact he treated people with respect and kindness. This is evident by the longevity of his employees and customers because he always treated them more like family and was always there to lend a helping hand. He was loved by so many and will be missed by many more... He is survived by his children; Georgiana, Michael, and Steven; his grandchildren, Jaylee (Adams), Ryan and his wife Megan and Bryan (Taylor), Jackson and his wife Michaela, Parker, and Grant (Deines); His Great Grandchildren Aero Deines, Rylee Taylor; Step children, Tracy and his wife Kea (Sheilds) their children Tyler and Jake, Tammy and her husband Nick (Burkett) their children Page and Nicole; Nephew Burt Deines and his Neice Bethany Deines as well as many other family and friends. He was preceded in life by; His Parents George K and Mollie Deines; his wife Cynthia; his Daughter Sharron; his brother Arthur and his wife Joan, and sisters Ruby and Frieda. Memorial Services will be postponed until a later date due to the Covid restrictions we didn’t feel like he would get the kind of service he deserved at this time. We will schedule a memorial and celebration of his life when all who want to attend can be present. We do apologize for this but I know he would understand he will also be cremated so there will be no viewing.

The family of Richard Edward Deines created this Life Tributes page to make it easy to share your memories.

Send flowers to the Deines family.