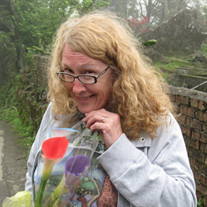 Rhonda Jean Wolschlager, 66, died Wednesday (July 24, 2020) at her home in Fort Collins, Colorado. She was born September 23, 1953 in Imperial, Nebraska to Robert G. and Edith C. (Benson) Gathman. She grew up on the family farm outside Hayes Center, Nebraska and graduated from Hayes Center High School in 1971. She later attended the University of Nebraska, Lincoln earning a Bachelor's degree in Accounting. While living in Fort Collins, Colorado Rhonda met the love of her life and soulmate Gordon Wolschlager of Bad Axe, Michigan. They were married on August 17, 1985. She retired in 2015 from Colorado State University where she worked in the Sponsored Programs Department as an accountant for 10 years. She was a member of the Laporte Presbyterian Church in Laporte, Colorado. Her service to the church included being the Church Mission Chair person. She co-founded and supported a Children's Christmas Shop at which disadvantaged children chose a present for their parents for 25¢ which were volunteers wrap while their parents enjoyed coffee and cookies. She was a member of the American Legion Auxiliary since childhood in Hayes Center, Nebraska later transferring her membership to the American Legion George Beech Post 4 in Fort Collins, Colorado. There she served as President, Sergeant at Arms, and the Coordinator of Volunteer Hours. Her favorite hobby was shopping for second hand clothes. In many circles she was known as the “The Garage Sale Queen”. She frequented any and all thrift stores and garage sales that she came upon. Supplying the Church's Children's Christmas Shop with presents every year gave her so much joy. Preceding her in death were her sister Marsha and her parents. Survivors include her husband Gordon, and two sons Seth and Jared. Rhonda died peacefully at home with family after a 5 year battle with Progressive Supranuclear Palsey (PSP). She loved to travel and created a bucket list traveling 1000's of miles all over the USA with her husband Gordon. She completed her list just this year with a 17 day cruise to Hawaii returning March 18. Days later cruise ship travel was halted due to Coronavirus. Memorials are planned at the Laporte Presbyterian Church as well as the American Legion George Beech Post in Laporte at a later date. In lieu of flowers/gifts please consider donating to; The Laporte Presbyterian Church mission work The American Legion George Beech Post 4 The Union Congregational Church, Hayes Center Nebraska

Rhonda Jean Wolschlager, 66, died Wednesday (July 24, 2020) at her home in Fort Collins, Colorado. She was born September 23, 1953 in Imperial, Nebraska to Robert G. and Edith C. (Benson) Gathman. She grew up on the family farm outside Hayes... View Obituary & Service Information

The family of Rhonda Jean Wolschlager created this Life Tributes page to make it easy to share your memories.