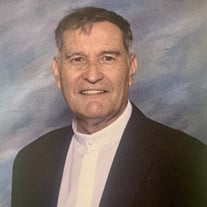 Reuben Moore, age 87, died peacefully and departed to his beloved Savior on May 2, 2021. He is survived by his caring and loving wife, Julia (Concha) Moore, sons Russell (spouse Veronica), Jay, Rodney, and Curt. He is also survived by five grandchildren Jason Moore, Ashley Moore (spouse Tina), Sean Moore, Danielle Moore, and Jeremy Moore and numerous nephews and nieces. Reuben Ramon Moore was the youngest child of Virginia and John Moore and preceded in death by brothers Albert, Thomas, David, John, and Sisters Amanda, Pearl, Margaret, and Ramona. Reuben was born in Fort Collins in 1933, graduated from Fort Collins High School and served in the US Army in the Korean War where he was honorably discharged as Private First Class in 1955. Reuben loved all sports and played semi-pro baseball for the Fort Collins Legionnaires and the Fort Collins Rebels under the tutelage of his older brother Dave and his longtime friend and mentor Lee Suniga. He married Nancy Farley in 1956 and resided in Cheyenne, Wyoming where they raised four boys. Reuben was employed by the Frontier Refinery in Cheyenne for seventeen years. He also coached his four boys in the Cheyenne Little League baseball where they won several Little League titles while he continued playing baseball. Reuben and his first wife, Nancy, were very active in their children’s activities and sports and were supportive parents in all their activities. While in Cheyenne, Reuben became a franchisee owner of the Arctic Circle Restaurant and was eventually transferred to Las Vegas, New Mexico to become the owner of the local Arctic Circle Restaurant. Reuben’s entrepreneurial spirit continued in Las Vegas as he and Nancy acquired three additional businesses. Their businesses enabled them to put all the kids through college. Reuben and Nancy divorced in 1981 and began a nomadic tour of the southwest holding various jobs in Arizona and California. Reuben finally re-settled in Fort Collins in 2002 and reunited with several childhood and school classmates. He enjoyed sharing childhood stories with family and friends. He never missed a moment to watch the Colorado Rockies, Denver Broncos, and Denver Nuggets. Reuben met his second wife in 2003 and were later married in 2004 where they enjoyed their 17 years together in Fort Collins. They traveled to Panama and Ecuador (Julia’s birthplace) and traveled together in the Southwest of the US. In his final days, Reuben’s sons and wife were at his side to share in his passing. Because of Covid-19, funeral arrangements and attendees are limited.

Reuben Moore, age 87, died peacefully and departed to his beloved Savior on May 2, 2021. He is survived by his caring and loving wife, Julia (Concha) Moore, sons Russell (spouse Veronica), Jay, Rodney, and Curt. He is also survived by five... View Obituary & Service Information

The family of Reuben Ramon Moore created this Life Tributes page to make it easy to share your memories.

Reuben Moore, age 87, died peacefully and departed to his beloved...

Send flowers to the Moore family.