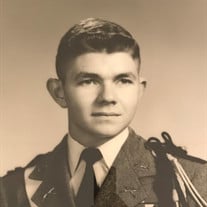 Rardon Dixon Bevill, III, 79, a longtime resident of Ft. Collins, CO, and formerly of Darien, CT, passed away peacefully surrounded by his family on October 5, 2017 of head and neck cancer. Mr. Bevill was born on February 23, 1938 in Winnfield, LA to Rardon Dixon Bevill, Jr. (affectionately known as Quack) and Susan Ballance Bevill. He was a graduate of Sewanee Military Academy in Sewanee, TN and Washington and Lee University in Virginia. He later attended the University of Minnesota where he received a PhD in Biochemistry. Dr. Bevill served in the US Army from 1960 - 1968, where he attained the rank of Captain in the Medical Service Corp. Following his discharge from the Army, he worked for Vickers in the early development of medical blood testing machines. In the mid 1970's, Dr. Bevill shifted careers and became a commodities broker working for a variety of institutions over 30 years. During his retirement years, he enjoyed working at Ace Hardware. Rardon was a member of the First Presbyterian Church of Ft. Collins and previously the Noroton Presbyterian Church in Darien, CT, serving as an Elder for both. Rardon enjoyed being outdoors, day hiking in the Front Range and pheasant hunting in the fall. He was a dog lover and could often be seen walking his German short haired pointers. He is remembered fondly by those who knew him as an engaged father, a passionate teacher, and a great coach. Rardon is predeceased by his sister Susan Elizabeth Bevill (September 4, 1941 - September 23, 1945), his son Charles Edward Bevill (November 8, 1966 - November 8, 1966), and his dogs, Winston and Maxwell. He is survived by his three children, Dr. Katherine L. Bevill; Mrs. Emily Bevill Lordi (George J. Lordi, III); and Mr. Daniel S. Bevill (Rosemary Collins Bevill). He is also survived by his three grandchildren, Aislinn E. Bevill, Corinne C. Bevill, and Gavin S. Lordi. A Memorial Service will be held at First Presbyterian Church, 531 S. College Ave., Fort Collins at 10am on Friday, October 13, 2017. A brief reception will follow. The family would like to thank all of Rardon's friends that have been with him and supported him. In lieu of flowers please consider a donation to Dana-Farber Cancer Institute in care of Bohlender Funeral Chapel, 121 W. Olive, Fort Collins,

Rardon Dixon Bevill, III, 79, a longtime resident of Ft. Collins, CO, and formerly of Darien, CT, passed away peacefully surrounded by his family on October 5, 2017 of head and neck cancer. Mr. Bevill was born on February 23, 1938 in Winnfield,... View Obituary & Service Information

The family of Rardon Dixon Bevill created this Life Tributes page to make it easy to share your memories.

Send flowers to the Bevill family.